Close but No Cigar—The Last Exorcism 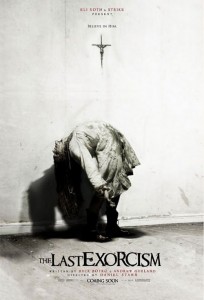 Good exorcism movies are few and far between. Of course, there’s The Exorcist which, way back in 1973, set the bar so high that any similar film that followed was bound to suffer in comparison. Of the more recent possession flicks, only The Exorcism of Emily Rose has approached the overall quality of the The Exorcist—until now. Director Daniel Stamm’s The Last Exorcism, written by Huck Botko and Andrew Gurland (and, yes, produced by Eli Roth), is a well-made and compelling, if ultimately frustrating, addition to the exorcism subgenre.

The Last Exorcism starts by introducing us to Cotton Marcus (Patrick Fabian), an evangelical preacher who is leaving his faith behind. While as a pseudo-documentary horror film, the first obvious comparison is to The Blair Witch Project, The Last Exorcism actually recalls Marjoe, the 1972 Academy Award winning documentary about evangelist and showman Marjoe Gortner. Like Gortner, the fictional Cotton Marcus is allowing his last act to be filmed to reveal the evangelical art of the con. But where Gortner’s last hurrah was a revival tour, Marcus plans to lay bare the truth behind his specialty. You see, Marcus is an exorcist. And he’s a master of his craft. But his conscience has caught up to him, so he’s going to let everyone in on the tricks of the trade as a public service.

From a stack of requests, Marcus draws the case of Nell Sweetzer (Ashley Bell), a childlike 16-year-old from the backwoods of Louisiana. Nell’s father, Louis (Louis Herthum), is sure she’s possessed and Reverend Marcus is more than happy to assist, much to the dismay of Nell’s disquieting brother, Caleb (Caleb Landry Jones).

As played by Fabian, Marcus is a interesting and charismatic character. He doesn’t see himself as a fraud; he’s just a man providing a service—giving the people what they want. But he’s a good man who cares very much about his family and those he helps. In his care, no one gets hurt and, hey, some may be even be healed. Stamm has cast his film extremely well. Every role is filled with the right performer.

Beyond that, Stamm knows how to work the documentary gimmick just right, as well as invest his movie with a spooky “this could really happen” atmosphere. Especially commendable is the director’s commitment to using only practical effects. (In the age of CGI, it’s nice to see loyalty to the craft of “real” special effects.) All of these elements combine to make The Last Exorcism a persuasively scary flick…until the very end of the film.

Most movies fall apart in the third act. But The Last Exorcism falls apart in the third act of the third act. The requisite twist during the flick’s last few minutes completely destroys all the goodwill the film rightfully earns up to that point. Even then, I was willing to go with it—until the last shot, which totally destroys the movie’s whole premise, or mise-en-scène. It’s a real shame, because for about 85 of its 87 minutes, The Last Exorcism is a killer little film, which leads me to ask: What possessed the filmmakers to end their flick this way? To be sure, it’s a groan-inducing question, to which there can be only one groan-inducing answer: The devil made ‘em do it.