I love noir. On film or on the page, it makes no difference. Its stories take place in world just left of our own, a reality that’s at once both heightened and concrete. Webster defines noir as “crime fiction featuring cynical characters and bleak settings,” and while that’s accurate, noir is so much more. It’s shadows and fog, smoke and mirrors, dangerous dames and damaged men. It’s the twists you see coming and the turn you don’t—truths that are lies, lies that are truths and, yes, lies that are lies.

There’s always a colorful cast of supporting characters—hustlers, pimps, flim-flammers, junkies and twisted old men that have seen it all and aren’t spilling a drop. Of course, there’s the language, which is a character in itself. Hardboiled slang tells it like it is, but says so much more. Guns are rods, heaters and roscoes; women are bims, dolls and frails; men are jaspers, lugs and palookas. Such colorful descriptions for a world painted in shades of gray.

And in that world, no one is innocent, least of all the hero. He’s a broken man who’s seen too much, but never enough. He’ll take it on the chin for his skirt, even as he’s sending her up the river—because he plays by his own rules. He’ll do the right thing, but it’s his right thing. 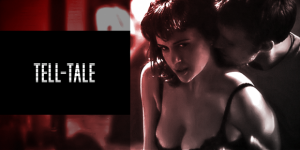 Then, there are the women. Whether secretary with a heart of gold or round-heeled chippy with a heart of brass, the women of noir are a major part of the landscape, integral to every mystery. And the most important distaff piece of the puzzle is the femme fatale—accent on the fatale. More curves than a coiled snake and twice as dangerous, these ladies are lethal. Broken dishes with a past longer than their legs and secrets to keep…and tell. Dark eyes that drag you in if you dare to get too close, and from which there is no escape. Not that you’d want to. You know they’re no good but you can’t walk away. They make life worth living, even if it’s behind bars. And make no mistake, if you do fall prey to one of these dames, it’ll be bars of one type or another. Prison or whiskey, your life will be over when they’re done with you.

Portrayed in film noir classics by actresses such as Gloria Grahame, Veronica Lake, Rita Hayworth, Lauren Bacall and Barbara Stanwyck, the femme fatale still exists today. In more recent times, she’s been played by Kathleen Turner, Linda Fiorentino and Isabella Rossellini. But currently, only one woman embodies all that is noir: Carla Gugino. A masterful actress, Gugino can play anything, and has. And with roles in pieces like Judas Kiss, Karen Sisco, Sin City and Snake Eyes, she’s proved she can handle anything noir has to offer.

I know what you’re saying: Great, but where’s the horror in all this? Horror and noir are a natural fit and have crossed paths several times through the years. Many stories by authors Edgar Allan Poe, H.P. Lovecraft and Robert Bloch can be described as noir, all shadows and ambience. And movies such as Nadja, The Addiction, Shutter Island and anything produced by Val Lewton (Cat People, I Walked With a Zombie) can easily be classified as horror noir.

Recently, Gugino teamed with Greg Williams and Sebastián Gutiérrez to make a film noir short. Based on The Tell-Tale Heart by Poe, Tell-Tale is a slice of modern horror noir that has all the necessary elements—lust, betrayal, death—as well as a generous helping of that most important ingredient: atmosphere. It’s a wonderful update of a classic tale. If you’ve never thought of it before, after you watch this skillful blending of styles, you’ll see why horror and noir sit so well together. It’s the dark—of the night, the soul and, most important, her eyes. Take a look. I dare you.