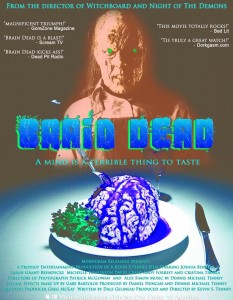 It seems like only last week I was discussing the legendary Kevin S. Tenney, director of such ‘80s horror cult classics as Witchboard and Night of the Demons. Wait a minute, it was only last week. Weird. Anyway, the Universe must have been listening, because a couple of days ago I got an email from Tenney with some great news for horror fans everywhere. On October 5, Brain Dead, Tenney’s latest film, is coming to DVD courtesy of Breaking Glass Pictures. That’s right, just in time for all your Halloween shopping needs.

Brain Dead is a kickass mutant space zombie movie that hearkens back to the days when horror flicks aspired to entertain, rather than repulse, an audience. Full of ingenious gore effects, gratuitous nudity and witty repartee, Brain Dead is as much a parody of classic zombie flicks as it is a clever update of this much-loved genre. After playing the film fest circuit, it took home 12 awards, including Best Feature at the Rhode Island International Horror Film Festival and Best Horror Feature at San Francisco Indiefest, as well as accolades for special effects at the B-Movie Film Festival and the Phoenix International Horror and Sci-Fi Film Festival. 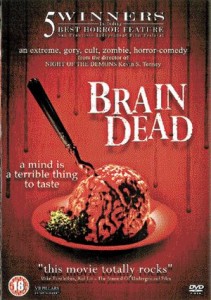 As I mentioned above, Brain Dead is a bit of throwback. An extraterrestrial parasite crash-lands in a backwoods American town and sparks a fast-spreading zombie infestation. As the brain-hungry monsters multiply, three pairs of unlucky misfits gather in a deserted fishing lodge for shelter. With zombies pounding at the door, the stranded travelers have only two choices: band together to stop the invasion, or serve themselves up as a main course. Will the ill-assorted victims snap and kill each other before the zombies get the chance to do it for them? Or will the ravenous astro-zombies be slaughtered by this rag-tag bunch of characters? You’ll have to check out the DVD to discover the fate of those involved—but no matter how it ends, I promise you’ll have a blast watching it, because Tenney has delivered a totally entertaining little flick.

Tenney has filled Brain Dead with versatile performers, such as Joshua Benton, Michelle Tomlinson and Sarah Grant Brendecke, who are a lot of fun to watch. They can handle the snark as well as the gore—and there’s plenty of both here. Much like Sam Raimi, Tenney can balance humor with horror, and Brain Dead is a perfect example of his skill.

So, do yourself a favor and pick up a copy of Brain Dead this October. It’ll be available from Amazon.com and Netflix, so you won’t have to work hard to find it. And while you’re at it, get yourself a copy of Tenney’s Night of the Demons too. Together, they’ll make the perfect Halloween double feature: Tenney—past and present. It also presents an interesting topic for debate. Which does Tenney handle better, demons or zombies? Discuss among yourselves and get back to me with your arguments. And remember, it’s pass/fail, so no pressure.