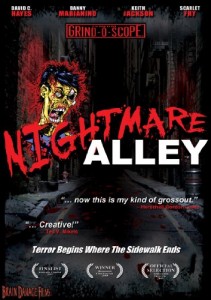 In my experience, anthology films are usually disappointing. In these movies, for every tale that succeeds, there are often two or three others that fail. Part of the problem is the format’s inherent limitations: It’s really hard to develop a compelling plot with interesting characters in 20 minutes. To try and do it three or four times in one flick is almost impossible. And to try to tie them all together in a clever way? Well, good luck. With their recent anthology Nightmare Alley, filmmakers Walter Ruether and Laurence Holloway have set a herculean task for themselves. Their micro-budget flick crams seven separate stories into one film. I guess it’s admirable to swing for the fences, but they have pretty much set themselves up to fail.

Filmed in what the DVD box proclaims to be “Grind-O-Scope” (which is actually just a filter that adds flaws to the picture à la Grindhouse), Nightmare Alley is a bunch of underdeveloped stories held together with a clunky framing device involving a Cryptkeeper-like host who introduces and comments on each story. While some of these tales have the germ of a promising idea, most are pretty generic, pointless fare. But a couple of them, “Meat” and “Closet Case,” have no real narrative at all and should have been cut from the flick. But, on the bright side, these two episodes do have something to offer. They provide an example of what’s wrong with the movie—and, trust me, it’s a common problem in these days of DIY digital movie making. 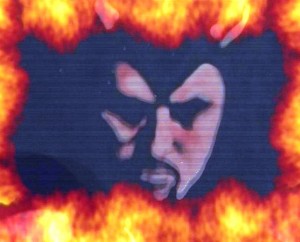 Preproduction is extremely important. Polish your script till it shines and previz your film. Storyboard it. Cut it in your head. The finished product will prove that the time was not wasted. The script for Nightmare Alley could’ve used several more drafts. Doing so might’ve allowed the filmmakers to find and develop a much better movie. It would’ve been wiser for the filmmakers to pick three of the strongest tales and then flesh them out into 25-minute pieces. Instead, we have seven 10-minute bits that never get the chance to go anywhere. Ruether seems to have a grasp of filmmaking basics, though they’re shaky at best. A few of the episodes have pretty good cinematography and direction—the camera placement is occasionally effective and there are some decent pickup shots—but more often than not, it’s just point and shoot. I don’t know how much preproduction was done, but I bet a little more planning would’ve resulted in an improved flick. Another valuable part of planning is the casting process. Most of the actors here are amateurish at best, although there are a couple of interesting performances sprinkled throughout—oddly, usually in supporting roles.

But there are some positives too. As I said, there are some good ideas here. With this kind of flick, the ghosts of EC Comics and Creepshow are never far away. The flick starts with a “Nightmare Alley” comic book whose horrific stories are visited on those who read them. That would’ve been a better framing device than the horror host, who has nothing of wit or interest to say. And one element of Nightmare Alley was truly impressive: the sound. Most of these independent, DIY horror flicks have spotty, atrocious sound, but Nightmare Alley has amazing sound throughout. That really helps—if the audience can’t hear the dialogue, there’s a good chance they’ll turn off the flick before the end. Nightmare Alley also had some pretty cool music on its soundtrack. Oh yeah, some of the gore effects rise to the level of serviceable. And there’s a sweet painting of Anton Szandor LaVey in one of the vignettes.

Every film is somebody’s baby and I respect that. It takes a lot to actually write, shoot and finish a film, so kudos to Ruether and company. But Nightmare Alley simply doesn’t work. Next time out, it would serve them well to remember that if it’s not on the page, it won’t show up onscreen.