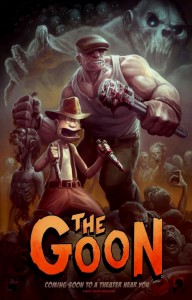 I’ve been a little down lately. Nothing serious, but I recently came across some cool new flicks and discovered some fresh, talented filmmakers, and that’s great. But it has to mean there are no more exciting things on the horizon, right? Sure, the trailer for Let Me In looks good. I’m sure it’ll be competent, but English-language remakes of foreign films rarely exceed the originals. I know, it doesn’t have to be better to be enjoyable, but… Sigh. Anyway. And Buried is coming, starring the always entertaining Ryan Reynolds, but it looks like Phone Booth in a coffin, and I’m sure you remember that flick. You don’t? ‘Nuff said. So… Sigh. Sorry, I didn’t mean to depress you too. Oooh, hey, wait a minute. It’s okay! You can cheer up, because there actually is something interesting headed our way.

The Goon is a comic book by Eric Powell, published by Dark Horse Comics, with influences ranging from ‘40s film noir and classic monsters to those glorious Golden Age newspaper comic strips of the past. Its cast of characters includes zombies, ghosts, mad scientists, vampires and smart-alecky wise guys with big mouths, bigger guns and very nasty dispositions. While Powell’s stories haven’t been consistently solid, his artwork has been divine since the book began—lush drawings colored in exquisite, moody tones that pay homage to the past but still manage to be modern. And if you like good old-fashioned monsters, there’s not a better artist around. Powell packs his book with so many ghouls and ogres and weird little critters that it warms a monster kid’s heart to flip through a copy. And his sense of humor is solid screwball. Powell finds dark horror humor in wacky gags of all sorts—little bits of business, moments, visuals, character work. What’s not to love? 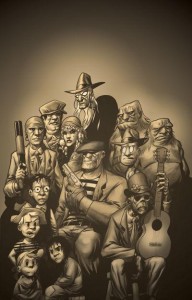 So, when I heard there were plans to make a CG animated movie of The Goon, I had decidedly mixed feelings. Sure, I’d love to see Powell’s book come to life on the big screen. But, would I see his book? I’m not the biggest fan of CG animation. Sure, Toy Story was great, but I could picture Powell’s cast of creepy creatures looking like Woody and Buzz Lightyear. Not cool. Maybe old-fashioned hand-drawn animation would better capture the spirit of the book. Not even the knowledge that David Fincher was producing and Powell was scripting eased my mind. Sure, I love Fincher, but he’s not known for his animated screwball noir monster movies…but, hey, who is? And Powell is a great artist, and his stories have gotten way better lately, but he’s never written a movie. And maybe he’s too close to the material.

Suddenly, a thought struck me—a thought that is always in the back of my mind, yet rarely in the front and has since become something of a mantra: Trust the artists involved. I mean, Fincher is a great director, and Powell loves his characters and has always been very protective of this book. If anybody can make this movie work, it’s these guys. 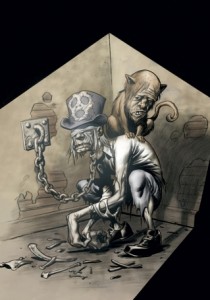 So, I’ve been repeating my mantra for a couple of months now. Trust the artist Trust the artist Trust the artist. Sure, it drives those around me crazy, but it makes me feel better. Perhaps the Universe would notice my devotion and reward me and all fans of The Goon. And you know something? I think it did. I recently saw a clip from the film and it’s wonderful. The tone is just right, and the vocal work from Clancy Brown as the Goon and Paul Giamatti as his pal Frankie is pitch perfect—exactly like I’ve heard these characters in my head for years. And the inclusion of a song by trash rock thrillbillies Southern Culture on the Skids never hurts.

I don’t know if you’ve ever heard of The Goon before now, but I highly recommend you stop by your local comic shop and pick up a few issues. You’ll be doing yourself a favor, because I think you’re going to be hearing a lot about him soon enough. And I know how much you like to be hip to the latest cool things. And as you can see from the clip below, The Goon is a very cool thing. Thank you, Universe, wherever you are.