Happy Birthday to Us—Meet the family 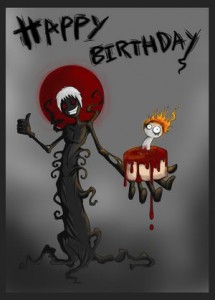 Can you believe it? After 12 months and 184 posts, the grand experiment that is Slammed & Damned carries on. We still don’t know exactly what kind of site Slammed & Damned wants to be, but I’m beginning to think that will never change. We’ve accepted the fact that our child will never go to medical school and will continue to do whatever he wants, which is fine. He’s always loved movies and the folks that make them, so maybe he’s on the right path.

One thing I have learned over the past year is that the horror blogging community comprises an insane group of talented people that truly love horror flicks and aren’t afraid to tell you why. I’ve made many friends since Slammed & Damned was born, and truth be told, I’ve come to think of them as relatives of a sort. I mean, what is family? Over the years, the definition has gotten bigger and more flexible, but I like to think that a family is a (sometimes disparate) group of people connected by a shared love—I believe that describes horror bloggers perfectly, don’t you?

So, on this, Slammed & Damned’s birthday, I want to take the opportunity not to discuss what Slammed & Damned has done (you know, things like the extended Rolfe Kanefsky interview, my friendly feud with Paul McCartney, my look at the Soska twins or Devi Snively, TFO’s free-wheeling roundtable interview, my philosophical reflections, mini-bios, McT & A’s recent adventures or even the scads of reviews that have been posted). No, I want to focus on this twisted extended family I’ve come into during the past year. 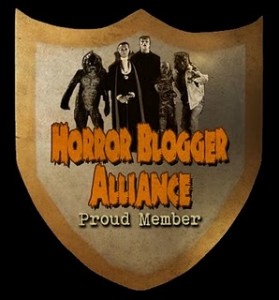 First, you can’t have a family without a mom and dad. And I think we all can agree that the father of all horror bloggers is the wonderful B-Sol over at The Vault of Horror, one of the most comprehensive horror sites on the inwebternet. A noted bon vivant and horror aficionado, B-Sol has gone out of his way to befriend me and offer advice, and for this I thank him graciously. And my horror mom will always be the divine Sarah Jahier over at Fatally Yours. She was the first person to give a virtual home to my screeds, even when my meager writing skills weren’t. Skills, that is (see, they haven’t improved much).

Every family has a couple of wacky brothers, and my brothers in horror are the lovely Chris Hallock over at All Things Horror and the equally lovely Cortez the Killer at Plant of Terror. Chris pretty much is horror in the Boston area, and Cortez regularly slays Dallas and the world with his keen insight and wit. Gentlemen and scholars both, please check ‘em out immediately if not sooner.

No family is complete without a crazy aunt and an off-the-wall sister, and Heidi Martinuzzi and Stacie Ponder, respectively, fill those roles. As you no doubt already know, Heidi is the proprietor the new site called FanGirlTastic, which is a new-and-improved iteration of her trail-blazing site Pretty/Scary. Crazy Aunt Heidi is controversially polarizing and wretched talented and, for some reason, she always makes time for me—time she absolutely doesn’t have because, like a hyper child, she’s in to everything all the time. Stacie, better known as the blogger Final Girl, has been expanding her palette to include all aspects of filmmaking. She’s been a friend for awhile, and I’m proud to watch her grow as an artist. Oh, and we can’t forget my crazy Uncle Johns, John Kenneth Muir and John Cozzoli at Zombos’ Closet of Horror. They are both exceedingly wise men. Read them. 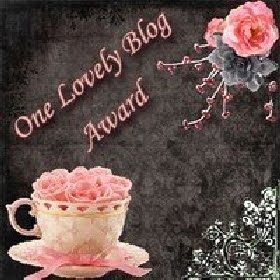 I have to admit that I’m pretty satisfied with what Slammed & Damned has done so far. We have a small, but steady, group of readers, which is fine. Admittedly, Slammed & Damned isn’t for everyone. We don’t really do horror news or cover the big horror films. We just kind of march to the beat of the muse we’re following (and mix our metaphors). But we’ve had a good time and done some cool stuff, with more to come. Of course, I couldn’t do it at all without the help of Kimberly Amato (my director of technology…well, all things ending in “-ology,” actually), a web guru par excellence as well as a talented performer and filmmaker. She’s planning some kind of techie stuff for Slammed & Damned, but (slammed and) damned if I know what it is. Come back and find out with me!

Better minds than mine will have to decide if it’s a coincidence that BP was able to fix the oil leak in the Gulf of Mexico during the same week that Slammed & Damned celebrated a birthday. I’m not at liberty to comment on that. One thing I can confirm is that we’ll be here at least another year. How do I know? Well, I paid the rent, of course. Are you scared yet?