A Week of Twisted Twins—Dead Hooker in a Trunk 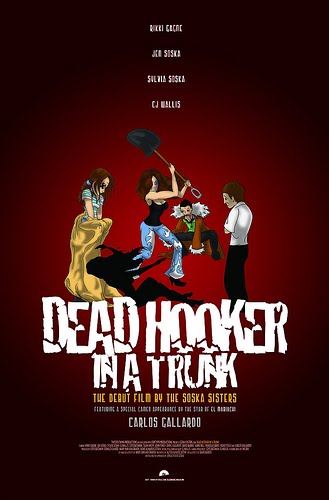 Over the years, Canada has produced some of the most interesting voices in horror. Bob Clark, David Cronenberg and John Fawcett are just some of the directors to emerge from the Great White North with singular voices and cool films. And with a forceful little flick called Dead Hooker in a Trunk, Vancouver-based filmmakers Jen and Sylvia Soska have pretty much grabbed the indie horror film community by the collar and demanded admission to this boys club. Word to the wise: If I were you, I wouldn’t argue with them. I’ve seen what they can do.

I first saw Dead Hooker in a Trunk a few months ago at a horror film fest. I’d never heard of the movie or its makers, but when I saw that title, I knew it was the one film I had to see that day. This is what I had to say at the time:

“Made by the Canadian twin filmmaking team Jen and Sylvia Soska, Dead Hooker tells the story of twin sisters who are complete opposites in every way, but learn they’re more alike than either would ever have believed. Yes, it’s the most disturbing feel-good movie I’ve ever seen. Funny, violent, gory, unsettling, gratuitous, excessive and kick-ass, the flick the Soska twins have delivered is the unlikely combination of utterly derivative and wholly original. At various points, I was amazed, amused, appalled, grossed out, disgusted, delighted, confused and restless—but I was never bored. The Soskas could have fixed the ‘restless’ issue by delivering a flick that was about 10 minutes shorter, I think. The film tells the story of four people that find the body of a hooker in their car trunk, and that is the highlight of their weekend. I left Dead Hooker in a Trunk with one main thought: It’s nice to know that women can make a film that is as bizarre and fucked up as anything made by a male. It also disproves the misconception that all Canadians are nice and normal. Way to go, ladies! Twisted Twins indeed.”

Granted, it’s not the most articulate review, but it’s accurate. As we sat in the darkened theater and this steamroller of a film plowed over the audience, my companions and I were overwhelmed by the action onscreen. The auditorium filled with gasps and nervous giggles from people that kept peeking at each other with wide-eyed looks that said, “Did they just do that?” When the movie ended, there was a slight pause while everyone oriented themselves, then the room filled with raucous applause. I left the theater knowing I’d just seen something that was as much a statement of purpose as it was an entertainment.

A couple of weeks ago, I got the chance to view the flick again when I received a copy of the Soskas’ final cut of Dead Hooker in a Trunk. This provided a welcome opportunity to review a film that, while not perfect, does what it does so well that it’s hard to pinpoint what it could’ve done better. 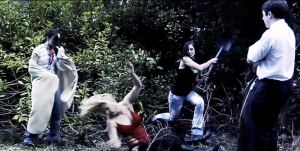 Dead Hooker in a Trunk opens with a blast of live hardcore music that accompanies an accomplished tracking shot through a ratty bar. The camera weaves around the club like a cobra, introducing us to the denizens that will inhabit the flick and setting a frenzied pace that the Soskas are somehow able to sustain for as long as they choose—I phrase it that way because, although the flick is a nonstop race from start to finish, the filmmakers also know exactly when to ease up and let the film (and us) breathe. I should say that the first version I saw didn’t exhibit this sure grasp of pacing. With this new cut, the Soskas have both tightened it up and smoothed it out. 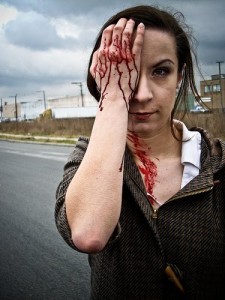 The Soska sisters have created an underground world full of people dealing with absurd, sometimes surreal situations that feel grounded in reality. None of the characters are developed more than necessary. They are mostly “types,” which is acknowledged by the fact that they don’t have proper names; in the credits, they’re referred to as the Junkie (Rikki Gagne), the Badass (Sylvia Soska), the Geek (Jen Soska) and the Goody Two-Shoes (CJ Wallis). But to be fair, there really isn’t time to develop them. Once Junkie and Badass find Hooker in their car trunk, the movie is off and running. It really only slows down once, for a touching scene of fellowship that would be sweet if not for the gore and death it contains…which brings us to another point. Exactly what type of movie is Dead Hooker in a Trunk anyway?

Because of all the carnage, the flick has been embraced by the horror community, but it’s not actually a horror movie. The Soskas have delivered a film that dips its toes into a lot of cinematic ponds. If I had to put it in a box, I’d call it a sexy, low-budget mumblecore crime thriller, wrapped in a gory exploitation flick and tied with a bow of black comedy. Because of this, some might say Dead Hooker in a Trunk doesn’t know what kind of movie it wants to be, but I think it knows exactly what it wants to be. And that’s what it is—an in-your-face, mondo-gonzo shot of adrenaline that’s all bad manners and punk rock attitude. 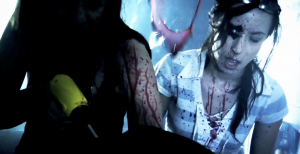 Although Dead Hooker in a Trunk serves as a calling card for the Soskas, it also introduces a couple of other major talents, namely CJ Wallis and Rikki Gagne. Gagne is a veteran stunt person who delivers a wonderful lead performance as Junkie. She actually makes you care about a character with few redeeming qualities. And while Wallis is quite funny as Goody Two-Shoes, his other contributions to the flick show him to be a ridiculously talented individual. Besides starring, he also worked on visual effects and served as cinematographer, editor and composer. He’s probably responsible for the smart and intuitive use of music throughout the film as well. Actually, every role, no matter how small, is filled with people with tons of experience. That’s Canada’s open secret—because so many Hollywood productions shoot there, its local film community is full of skilled performers and technicians. The Soskas seem to know them all. 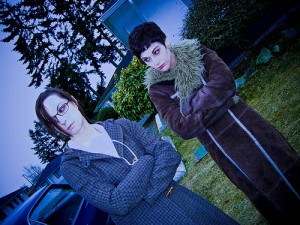 In my first review of this flick, I said Jen and Sylvia Soska had made a film that’s utterly derivative and wholly original. And that’s true, but Dead Hooker in a Trunk is that rarest of creatures: a movie that manages to transcend its influences. Much like Quentin Tarantino, the Soskas have been able to combine familiar, disparate elements to create something new. And much like Tarantino did with his first film, they’ve set the bar pretty freaking high for themselves. I can’t wait to see what they come up with next, but I’m slightly concerned. I mean, how do you follow up a radcore debut like Dead Hooker in a Trunk? Only the Soska twins can answer that question. Ladies?

This article was posted in Reviews and tagged CJ Wallis, Dead Hooker in a Trunk, gore, horror, Jen and Sylvia Soska, mumblecore, Quentin Tarantino, Reviews, Rikki Gagne, Slammed & Damned, Theron Neel, thriller, Twisted Twins. Bookmark the permalink. Follow comments with the RSS feed for this post.Trackbacks are closed, but you can Post a Comment.