A Week of Twisted Twins—Today, the short films of the Soska sisters 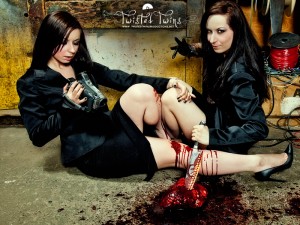 Welcome to a very special week here at Slammed & Damned. In honor of Jen and Sylvia Soska, those kickass Canadian twins responsible for the recent grindhouse film phenomenon known as Dead Hooker in a Trunk, I hereby declare this to be Twisted Twins Week. Over the next few days, we’re going to be taking an in-depth look at Jen and Sylv’s work. On Wednesday, I’ll be reviewing the new, final cut of Dead Hooker in a Trunk, and on Friday, I’ll have an exhaustive interview with these two vixens from Vancouver. But today, I want to take a look at three short films the Soskas made before their Dead Hooker came to light.

The Soska twins are best known for their recent feel-good movie about four friends who find the body of a prostitute in their car, but before they made their first feature, they honed their skills with a few short films. It’s interesting to look back at what led to Dead Hooker. In the few shorts that came before it, you can literally watch the growth of these ladies’ filmmaking abilities. Each flick is more accomplished than the previous. But one element is in place from the very start and on display throughout all their work: their sense of humor. The Soskas weave a layer of dark wit into everything they do—and they do a lot. Don’t be fooled by their love of blood and guts; Jen and Sylv aren’t just gore gals. Over the course of their short career, they’ve touched on many genres, including documentary, drama and parody, as well as the gruesome thriller we best know them for.

Although the Soskas attended film school and have been acting since childhood, they really found their feet by diving into the deep end and making movies for themselves. It’s fitting that the first piece to see the light of day was a short flick inspired by Quentin Tarantino. Tarantino is an obvious influence on Jen and Sylv, and they got the chance to pay homage to him when MTV sponsored a contest in which Canadian filmmakers submitted short films that riffed on Tarantino’s work. The contest was part of a promotion for Inglourious Basterds and Tarantino himself was the final judge. The Soskas’ entry, Tarantino’s Basterds, was chosen as a Top Three Finalist, and portions of it were shown on MTV Live. As you can see below, the ladies nailed some of Tarantino’s quirks while still displaying a personal style. For something made quick and cheap, this short is quite stylish and a whole lot of fun, especially if you know your Tarantino.

From there, the twins began entering film contests. The next flick we’re looking at, The Hornet, was made as an entry in the 2009 24-Hour Film Racing event, in which filmmakers have 24 hours to write, shoot and finish a 4-minute film. Right after the ladies finished filming, their neighborhood suffered a 5-hour blackout, which left them with four hours to complete their entry. Luckily, they had their collaborator CJ Wallis at the helm. With his assistance, they edited, mixed and completed The Hornet in less than three hours. (You’ll definitely be reading more about the talented Mr. Wallis this week.) The finished product snagged awards for Best Acting Ensemble (Jen and Sylvia Soska), Best Visual Effects (Jeffrey Zablotny) and was chosen as one of the Top 5 Best Films. The Hornet is ambitious, mixing elements of genres such as super hero, mumblecore and mockumentary in its four minutes. But it works well and shows the girls have more than mayhem on their minds.

The last flick we’re looking at today is closer to what the Soskas are best known for. bad girLs was made for the 2009 edition of Bloodshots, a 48-hour horror film competition. Filmmakers are given a line of dialogue, a weapon, a subgenre and a prop that must be included in a film no longer than seven minutes. The finished flick is a darkly funny, brutal tale of revenge that is an obvious precursor to Dead Hooker in a Trunk.

And, just for fun, I’m including a bonus. Earlier this year, the Soskas, along with CJ Wallis, created what is likely the coolest public service announcement ever made. As part of the Women in Horror month celebration, the Twisted Twins shot a promo piece for a blood drive. Considering the filmmakers, you can probably guess how it turned out.

All right, I’ll leave you to enjoy the short films embedded below. Be sure to check back throughout the week for more on those wonderfully Twisted Twins, Jen and Sylvia Soska.

This article was posted in Other Awesome Stuff and tagged bad girLs, CJ Wallis, Dead Hooker in a Trunk, grindhouse, horror, Inglourious Basterds, Jen and Sylvia Soska, Other Awesome Stuff, Quentin Tarantino, short films, Slammed & Damned, Tarantino's Basterds, The Hornet, Theron Neel, Twisted Twins. Bookmark the permalink. Follow comments with the RSS feed for this post.Trackbacks are closed, but you can Post a Comment.