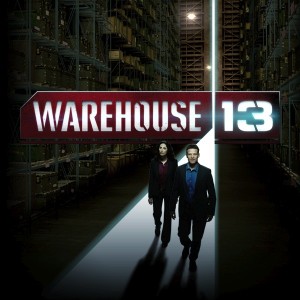 It’s fairly well known that basic cable channels such as AMC, USA, TNT and FX produce some of the best original programming on television these days. Because they are cable networks, they have looser standards regarding content and language, which allows them to broadcast edgier material. While I love edgy, controversial TV shows as much as (and maybe more than) the next guy, one of my favorite new programs is a bit of a throwback. Warehouse 13, Tuesdays at 9 p.m. (8 p.m. CST) on Syfy, manages to delight and entertain using nothing more cutting-edge than first-rate writing, excellent performances and solid production values. It warms my jaded little heart to know that’s still possible.

Warehouse 13 has been called a combination of Moonlighting and The X-Files, and I suppose that’s a pretty good description, though it’s not as smart-alecky as the former or as self-serious as the latter—thank god. Don’t get me wrong; I love both those programs, but even though Warehouse 13 resembles other shows, it has enough of its own ideas to set it apart from, and arguably above, other similar programming. When the show premiered, I had high hopes for it, but didn’t expect much. It began with a two-hour pilot that tried to do more than it should have and, therefore, didn’t manage to do a lot well. But soon after that disappointing start, Warehouse 13 righted itself and has since fallen into a consistent rhythm. Not all of the shows are amazing, but they’re never less than very good. That alone is reason enough to check it out. 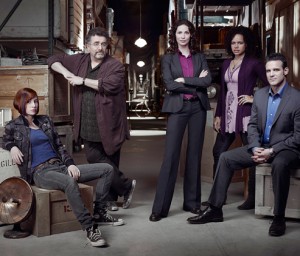 Now in its second season, Warehouse 13 is the story of two Secret Service agents, Myka Bering (Joanne Kelly) and Pete Lattimer (Eddie McClintock), who have been removed from their regular duties and assigned to Warehouse 13, a super-secret government facility that houses paranormal artifacts. Their job is to “snag, bag and tag” any new or missing supernatural objects—things such as Lewis Carroll’s looking glass (you know, the one Alice really stepped through) or Edgar Allan Poe’s pen and notebook (which have the power to create reality). Bering is a by-the-book, Type-A personality and her new partner, of course, is the opposite. Lattimer is a big, goofy puppy dog of a guy. But he’s smart, intuitive and unconventional. Together, they (and the actors that portray them) share a wonderful chemistry. The warehouse is managed by Dr. Arthur “Artie” Nielsen (Saul Rubinek), a man whose whole life is Warehouse 13. Also on board is Claudia Donovan (Allison Scagliotti), a snarky whiz-kid that acts as warehouse assistant and all-around mascot. Artie’s boss, Mrs. Frederic (CCH Pounder), is the shadowy figure who, as part of a mysterious cabal, oversees the seemingly centuries-old warehouse program. 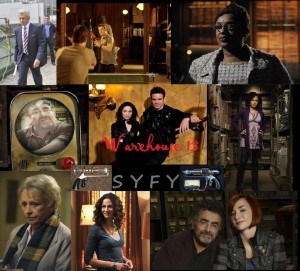 That description makes it sound like a rather dull and generic proceeding, but Warehouse 13 is nothing of the sort. Created by D. Brent Mote and veteran genre writer Jane Espenson, Warehouse 13 sparkles effortlessly with fun, interesting ideas and witty screwball banter. Because many of the storylines involve articles anchored in the real world, such as Studio 54’s disco ball, it often allows the writers to have fun rewriting history. Espenson has spent time on several Joss Whedon productions, and it shows here. The show’s sharp repartee is reminiscent of Firefly, or even Gilmore Girls, another show Espenson worked on. The production design on Warehouse 13 is another part of its charm. The warehouse is a character in itself and is filled with cool artifacts and gadgets, all coated with a hip steampunk sheen.

So, if you’re a fan of sci-fi, fantasy or just smart, well-made television, it would be hard to do better than Warehouse 13. It’s a show that’s predicated on the belief that there’s “no such thing as no-such-thing.” Luckily for us, there is such a thing as Warehouse 13.