As the writer of screenplays like The Fugitive, Waterworld and Warlock, David Twohy has proven he knows his way around genre. As a writer/director of his own films, he’s been less successful. For every Pitch Black, there’s a The Chronicles of Riddick. He’s a bit exasperating, but he’s usually interesting. But with his latest flick, A Perfect Getaway (2009), Twohy gets everything right, and then some. Using our knowledge of film conventions against us, the flick slyly subverts all we know about the way thrillers work. Does Twohy play fair? Maybe he does and maybe he doesn’t. But the end result is so satisfying, it doesn’t matter. It’s just fun to watch him show off.

Writing about A Perfect Getaway is a bit maddening. Because the twists and turns are everything here, a frustrating level of vagueness is demanded. So bear with me. The film starts like your standard-issue genre romp. A newlywed couple goes to Hawaii for a honeymoon. Once there, they learn that another pair of honeymooners has been murdered by a man and woman. As our protagonists hike the secluded tropical paradise, they soon meet another couple that may or may not be the killers. The game is afoot. Along the way, there will be a few laughs, a few scares, some red herrings and a plot twist to close Act Two. We’ve seen this movie a thousand times and know exactly how it will play out. And Twohy knows we know, and this knowledge has allowed him to construct a movie unlike any we’ve seen. And make no mistake—this movie is constructed. Twohy lays the foundation and stacks all the bricks just so. Then he has the temerity to knock them all down and rebuild something even more interesting from the debris. 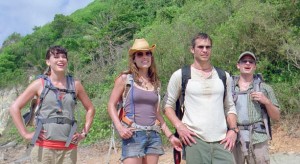 Part of the film’s success is due to its brilliant casting. To some degree, stars Steve Zahn, Milla Jovovich and Timothy Olyphant all play against type…until they don’t. The way this movie is written allows the actors to do a little of everything. But it also requires they do quite specific things to pull off the film’s central conceit—things that are difficult for any actor. To their credit, all the players are up to the challenge, with everyone involved modulating their performance skillfully. The success of A Perfect Getaway is absolutely the result of a team effort. Much of credit goes to the flick’s editor, Tracy Adams. But it’s Twohy’s hubris that’s to be admired most. The audacity of his writing here is matched by his complete confidence as a director, demonstrated by his use of several disparate filmmaking techniques and innate ability to keep this whole ambitious enterprise from getting away from him. He’s adept enough to hint at his plans, then actually come out and tell you what they are, then carry them out right in front of you without you knowing and finally turn everything around. Rare is the movie that tells you almost everything but still keeps you guessing.

Sure, we have to play along a bit. Some will accuse Twohy of cheating and being way too clever for his own good—and he is. But that’s not always a bad thing, especially in a thriller. In fact, sometimes, it’s the perfect getaway.

This article was posted in Reviews and tagged A Perfect Getaway, David Twohy, genre, Milla Jovovich, Pitch Black, Reviews, Slammed & Damned, Steve Zahn, The Chronicles of Riddick, The Fugitive, Theron Neel, thriller, Timothy Olyphant, Tracy Adams, Warlock, Waterworld. Bookmark the permalink. Follow comments with the RSS feed for this post.Trackbacks are closed, but you can Post a Comment.