Now Playing at the House of Grind—The Beyond 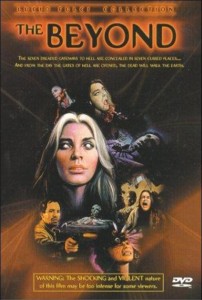 I’ve accepted the fact that Italian horror maestro Lucio Fulci and I have a strained relationship. It’s nothing personal. Although I appreciate his work, it rarely engages me emotionally. I know this makes me tragically uncool, but there it is. I’ve said it. Dario Argento and Mario Bava? I love those guys, but Fulci? We just don’t click. And that’s fine.

Recently, I realized that I’ve never seen The Beyond (aka E tu vivrai nel terrore! L’aldilà), considered by many to be his masterwork. Of course! Maybe if I experienced this beloved piece of Euro horror, the doors to the Fulci Admiration Society would open wide and beckon to me. Then it would all make sense—all the canine terror and eyeball violence. So, I watched The Beyond, waiting for the epiphany I knew was coming…and you know what? Nothing really happened. But, gosh, isn’t that the way life works?

Like most of Fulci’s films, The Beyond has had a troubled past. Released in Europe in 1981, it didn’t hop the pond until 1983. Part two of the so-called Gates of Hell trilogy, The Beyond arrived in America retitled Seven Doors of Death. It was severely edited for the U.S. market due to Fulci’s patented over-the-top gore—melting faces and eye gouging abound. The scant plot is almost beside the point. A woman named Liza (Katherine MacColl) inherits a dilapidated Louisiana hotel, apparently near New Orleans, which just happens to house one of the seven doors of death, through which spirits of the dead pass to visit our world. As soon as Liza begins renovations, a plumber named Joe dies. Later, Liza meets Emily (Sarah Keller), a young blind girl with milky eyes and a seeing-eye dog named Dickie. Emily warns her to cease and desist in her attempts to reopen the hotel. Soon, the local pathologist, Dr. John McCabe (David Warbeck), gets involved and demands a rational explanation for all the Fulci strangeness. Spoiler: He doesn’t get one. What he does get is a shootout with zombies and a free trip to the other side of death’s door. 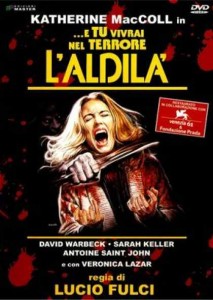 Granted, while I’ve told you what happens, what’s more important is the way it all happens—it’s the telling, not the tale. After the basic plot is in place, The Beyond begins to resemble a gore flick directed by Ingmar Bergman. Random events happen with seemingly little connection to other random events. The flick is quite surrealistic and dreamy, with lots of evocative imagery. Also, Fulci makes nice use of New Orleans’ atmosphere but, sadly, all the impressionism and ambiance never manages to gather and build to a satisfying emotional payoff. But that’s the way I feel about all Fulci flicks, so your mileage may vary. The one thing that did work for me was the last half hour of the film. That’s when the action picks up and the zombie shootout occurs. Sure, there is the occasional appearance of the living dead throughout the film’s first hour, but in the last thirty minutes, events occur which put our heroes in the midst of a whole freakin’ throng of zombies. And my research gives me a clue as to why.

Apparently, the German distributor that owned the rights to the movie wanted a zombie flick, not a haunted house flick. So Fulci rewrote the end of the film to pump up the (zombie) volume. I really hate that I liked the part of the film that Fulci probably thinks of as a terrible compromise, but there it is—again, tragically uncool. Though perhaps it happened this way: After the discussion with his distributor, Fulci realized that, hey, they were right. Maybe what The Beyond actually needed was a kickass last act to balance out all the self-indulgence (i.e., decadent macabre Italian poetry) of the first hour.

At least, I’d like to think that’s the way it happened. But, yeah, probably not. Anyway, I’ll leave you now with a few stray thoughts—some of my notes that didn’t find their way into my review but might still have value.