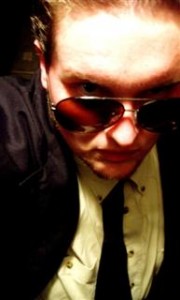 Indie film director Matthew Reel is a man of many talents. Writer, artist, vocalist—it’s hard to pin him down. Drawing on influences as diverse as Kenneth Anger and Herschell Gordon Lewis, Reel’s films are deeply personal visions. Jessicka Rabid, his recent collaboration with actress Elske McCain, might be his most controversial project yet. I sat down with Reel before the film’s release to chat about filmmaking, art and loving the bomb.

Hey Matt, thanks for talking with me. Jessicka Rabid has been getting a lot of attention it seems. How’s the film coming along? Is it almost ready?

Yes! The film is almost in the can, just some sound work remains. Sit tight, kids!

You are doing almost everything on this movie. Has the process been overwhelming for you?

There have been moments, certainly. I’ve anticipated it, though. The whole feature film thing is a completely different animal, so I made sure to expect the unexpected. I haven’t pulled my hair out or anything, but it did kick my butt a few times. It’s worth it.

How did Jessicka Rabid come about?

Basically, Jessicka came about during a time when I was in a creative rut and didn’t have any ideas coming my way. Elske [McCain] threw a title at me and I gave it a shot.

Elske’s initial vision for the flick was slightly different than what you came up with, right?

Well, what she wanted was something of a slasher with a female serial killer. When I wrote it, I was a bit obsessed with bizarro films like The Baby. I also wanted to do something really trashy like something from Michael Findlay or Joe D’Amato. Once I started writing, the story went way out into left field. The last thing I wanted to do was a traditional horror film. There was plenty of room to throw in some wonderful absurdities, I just went with it. The end result is a nasty, perverse, weird little film. 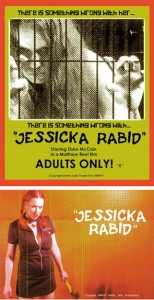 Do you consider Jessicka to be sort of the end result of all the work you’ve done previously? In other words, have all films led to Jessicka Rabid?

I suppose you could say that. It has a lot of the elements from my earlier work, from the sex and violence to many of the experimental aspects. It’s definitely a Matthew Reel film.

I really dig the lo-fi, grindhouse look you’ve come up with for the flick. Are you influenced by that period of film history?

Of course! You’re always going to find my fondness for the sixties and seventies in my work. I love the look and feel of the movies from that time, mainstream and underground.

You’ve known Elske for a while now. Do y’all have any other projects planned? I’ve already heard rumors of a Jessicka sequel.

Elske and I have been good friends for a number of years now, [and] we’ve worked together quite a bit. We’ve made a great team. We’ve both got some projects that we’re working on individually at the moment, but neither of us have made plans for another project yet. We’ve been so absorbed with Jessicka the past year and a half, we’re both shifting gears for the time being it seems. We did talk a little about a sequel. I even came up with a few ideas, but I don’t think I’ll be involved with that right now. Who knows? 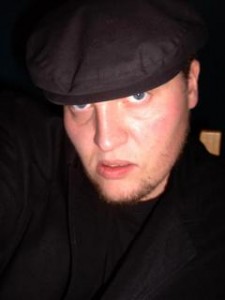 I understand congratulations are in order, sir. You’ve recently married. Has that had any measurable effect on your filmmaking?

Thank you, it really means a lot to me! To answer your question, I feel that my marriage is only going to enhance my filmmaking. My wife’s sensibilities complement my own quite nicely. We’ve already collaborated on a short film [O Cinzeiro], when I visited her in Portugal. Also, between the two of us, I don’t think I’ve had as many ideas to work with before. She’s already been helping me with some of the characters for a possible spaghetti western/exploitation prospect called There Will Be Demons. Not to mention she has a few wonderful ideas of her own. She’s already proven to me that she is a great actress as well, so I think the answer to your question is “yes.” We’ve collaborated on an online art project called Surreal Fusion Gallery, which contains both her artwork and mine .

I know you are influenced by all the arts, but what filmmakers do you consider prime influences?

My greatest influences are the underground and experimental filmmakers of the sixties and seventies and the German expressionists. When I was younger, I often went to the university library after got out of classes in high school and middle school. That was when I lived in Virginia. They had a huge video/laserdisc collection, and I spent a good couple years absorbing as much as I could. I remember stumbling on the works of Kenneth Anger. For years, I hated it because I didn’t understand it. I hadn’t seen films like that before, but they were also the ones that stuck in my head. Later, I became obsessed with filmmakers like George Kuchar and Robert Downey Sr. I’m also a huge fan of Herschell Gordon Lewis, my first cross-stitch piece was based on Blood Feast. It wasn’t a very good piece, but I sent it to Herschell. He told me that he’s shown it to people and they think we’re both crazy. [Laughs] Also, my wife pointed out that I watch a lot of David Cronenberg, which I never really noticed as part of my viewing habits. I’ve also come to admire David Lynch. 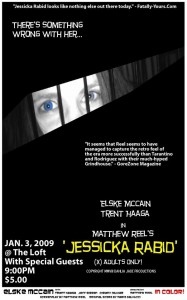 So, what do you think about the state of the film industry today?

As in Hollywood? I think it’s quite all right. I know many complain about the amount of remakes and other popular crap; I used to as well. I’ve come to stop worrying and love the bomb, so to speak. Hollywood is going through a cycle, just like always.  I’m sure if we were in the sixties or seventies right now, we’d be complaining about what’s coming out too. It’s silly. Hollywood has never been that imaginative. There’s just not as much risk-taking going on these days. The independent and underground community is thriving, and I’m seeing a lot of great talent out there. With technology advancing in quality, and prices on technology going lower, there’s a lot of voices out there now. Not saying that there isn’t a lot of crap there too, because there is—there is a lot of opportunity for someone to go out and make a movie. Look, you could go into Best Buy and find a camcorder that not only shoots in HD but also in 24p, with a mic jack, for less than $1,000.

I know you paint and you sketch. I’ve also heard you’re even a bit of an opera singer. Do you have a favorite artistic medium?

[Laughs] Yeah, I used to study opera, for nine-plus years even. But I don’t do that much these days. I do a few watercolors every now and then, but my wife’s the painter. My medium is something I call Cult-Stitch. I’ve done a lot of cross-stitched pieces based on horror movie posters, heavy metal album covers and the like. I’ve even sold a few, and just now I’m working on a commissioned piece with my wife.

Sounds like you have it all sewn up, Matt…

This article was posted in Interviews and tagged bizzaro, controversial, Elske McCain, exploitation, grindhouse, horror, indie, Interviews, Jessicka Rabid, Matthew Reel, Slammed & Damned, slasher, Theron Neel. Bookmark the permalink. Follow comments with the RSS feed for this post.Trackbacks are closed, but you can Post a Comment.