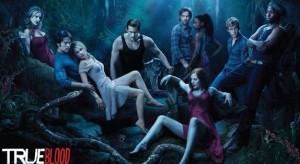 Did anyone else watch the third season premiere of True Blood the last Sunday night? Louisiana’s favorite vampires are back in action, and things are looking up in the not-so-sleepy town of Bon Temps. If you’re the horror fan that’s not acquainted with Alan Ball’s most recent HBO series, allow me to give you a quick recap. (Caution: Mild spoilers follow.)

True Blood, based on a series of books by Charlaine Harris, is set in a world where vampires have “come out of the coffin” and made their presence known, and all they want is to co-exist peacefully with us mortals. The Japanese (of course) have invented a synthetic product called Tru Blood that allows vampires to live without need for human blood. The show’s action centers around strong-willed psychic barmaid Sookie Stackhouse (Anna Paquin), local object of fascination and love interest of Civil War-era vampire Bill Compton (Stephen Moyer). The program works on a couple of levels, and metaphor and allegory are at play involving issues such as gay rights and mixed relationships. Thankfully, the creators stopped beating us over the head with subtext after the first season. Since then, we’ve been allowed to sit back, soak up the local flavor and watch as Bon Temps and its crazy cast of characters come alive. And to the credit of everyone involved, the show hits more than it misses. 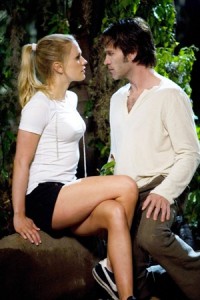 I don’t know about you but, while I enjoyed last season, I think the whole “Maryann the maenad” storyline was a bit of a misfire. Granted, actress Michelle Forbes was a hoot as her Maryann bewitched the entire town, but it locked many of the characters into a set of uncharacteristically reactionary behaviors, which is a bad dramatic choice when your cast and the characters they portray are so appealing and the main reason the show succeeds. For example, Sookie’s sassy sidekick Tara (Rutina Wesley) became a shell of her former self. It was hard to buy her (and Wesley) as a damsel in distress and not a lot of fun to watch. Hopefully, she’ll find her backbone this season. Also, on a related note, Sookie seems to be locked into playing detective as she searches for her missing lover. Argh! I understand the writers have to take the characters on journeys and give them an arc, but maybe this season they can make these journeys daytrips rather than extended vacations.

I like where the premiere has left us. The “vampires selling vampire blood” storyline featuring vamp sheriff Eric Northman (Alexander Skarsgård) is still in play and Evan Rachel Wood is still chewing up the scenery (and anything else she can sink her fangs into) as Sophie-Ann, queen of the Louisiana vamps. Word on the street is this season introduces a couple of new characters, chief among which is a werewolf. Hopefully, it won’t get all Twilight-y on us. And what of rootless shapeshifter Sam Merlotte (Sam Trammell) and his search for his birth parents? What was that homo-erotic dream all about? Does it relate to Sam’s attempts to find himself…for when a man is a shapeshifter, who is he really? If this all sounds a bit sudsy, remember that True Blood is nothing if not a soap opera at heart. Think of it as a modern version of Dark Shadows (a modern version of which appeared and disappeared a few years ago), but with lots of sex and violence. 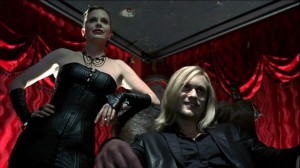 As I mentioned, one of the best things about True Blood is the well-cast group of supporting actors that help flesh out the show’s universe. This season, I hope we get to see more of underused players such as Eric’s deliciously snarky assistant Pam (Kristin Bauer) and Tara’s mom Lettie Mae (Adina Porter). Also, I’m happy to report the partial repair of the wonderful Lafayette (Nelson Ellis), another lion too long a lamb. Like Tara, it was disconcerting to see such a strong character forced into playing a weakling. Last Sunday, he was a blast when he set Lettie Mae straight, but he still cowers at the sight of fangs.

In any case, I’m glad True Blood is back. Ball has done a wonderful job of delivering a fun, adult “popcorn” show, featuring the best opening sequence on television. A lot of credit for True Blood’s success should go to the writers. Though the show’s soap opera leanings are a bit much at times, the writers always do a good job of tying everything up. And it looks like, for the next several weeks, my Sunday nights are tied up as well—because I can’t wait to see what real bad things these intriguing characters will do next.