Alice Cooper and the Scariest Song I Know 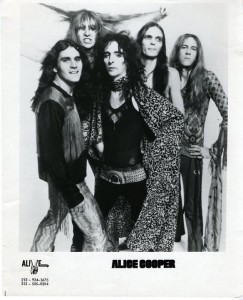 It’s surprising how well I remember November 24, 1972. Actually, I don’t recall the whole day—just about a half hour or so. But those thirty minutes are pretty much seared into my brain. That was the first time I saw the band Alice Cooper. It was the premiere of ABC’s music show In Concert, which was a fairly revolutionary program in those days. It featured rock bands taped live in concert. Yep, that was all it took to be considered revolutionary television back then. It must have been about midnight when I changed the channel from whatever I was watching to find a crazed Alice Cooper in the midst of a street fight, brandishing a switchblade and rolling around a stage strewn with trash cans to the still-modern sounds of West Side Story. The fight ended with Alice stabbing a guy in the stomach before being dragged off to a gallows and hanged by the neck, while a rabid audience of college kids roared.

And my world tilted. It was the coolest thing I’d ever seen.

For an 11-year-old boy, this was life-changing stuff. I was a fairly hip kid. Music was pretty much everything to me back then, and had been for years. I already owned the entire Beatles catalog and knew it, and most of the Rolling Stones and Elvis catalogs, inside out. I hung out with my friend’s older brother and his buddies, when they’d take pity on me. Occasionally, they’d even let me to listen to their albums, thereby changing my future by turning me on to all kinds of new, experimental music (the type regularly heard on FM radio of the time). I read magazines like Crawdaddy!, Circus, Rolling Stone and Hit Parader, so I knew who Alice Cooper was. But reading about this group of musical madmen and seeing them live were two totally different things. Of course, this meant I had to have all of the band’s albums immediately.

School’s Out was Alice Cooper’s latest release at the time, but I couldn’t find a copy of that anywhere. Instead, I ended up at a surprisingly with-it Target, where I found Killer, which had been released a few months earlier. It came with a calendar/poster of a bloody Alice hanging from the gallows—this went up on my wall right away, thrilling my mom to no end. A few days later, I finally got my hands on the School’s Out album, whose vinyl disc was wrapped with a pair of panties—which also went up on my wall. Again, my mom was thrilled. Then I bought the Love it to Death album, home of the scariest song I know.

Love it to Death, produced in 1971 by Bob Ezrin, is a great album that represents Alice Cooper’s evolution from psychedelic garage band to shock-rock glam band with horror leanings. While the hit single here was the teen anthem “I’m Eighteen,” this album is also home of “The Ballad of Dwight Frye,” about an escaped mental patient and whose title alludes to an actor from the classic 1931 film Dracula. “Black Juju,” the scariest song I know, comes at the end of side one. 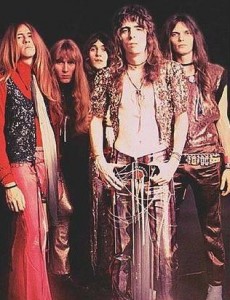 How much did this song scare me? Late at night, I used to turn off all the lights in my room and play “Black Juju” to see if I could make it all the way through its nine minutes without jumping off my bed and turning the lights back on. (I know.) Even now, when I hear it I experience a twinge of spookiness, because the song truly is affecting. Having trained as a musician, I can tell you why it’s scary. I can break it down into theory and discuss minor chords and half steps or the masterful use of dynamics, the throbbing jungle drums and hypnotic organ riff, or the power of repetition and the properties of trance, not to mention the song’s dark, evocative lyrics delivered in Alice’s ragged scream-chant—and all of that does apply. But the truth is that the sum of all those parts is a potent, eerie experience. Though it sounds pompous to say, that’s what art is supposed to do: allow an affecting experience.

Watching the video of “Black Juju” below, recorded live without an audience back in 1971, one can’t help but think all the fuss seems a bit silly now. But, trust me, it was incredibly transgressive stuff at the time (don’t forget, this was before Kiss’ monster makeup kit made it big or the explosion of David Bowie’s glittery “is he or isn’t he” madness). It’s important to know that the version of the song on Love it to Death is much more subtle, and therefore more powerful, than this somewhat canned TV studio performance.

Sure, I’ll admit part of the reason “Black Juju” is the scariest song I know is due to the feelings I had as an 11-year-old. But I honestly think those feelings are still valid. If nothing else, “Black Juju” never fails to get a reaction from the kids when I play it on Halloween. And I can’t think of a better test of its relevance than that.

This article was posted in Other Awesome Stuff and tagged 1971, 1972, ABC, Alice Cooper, Black Juju, Bob Ezrin, Circus, Crawdaddy!, David Bowie, Dracula, Elvis, Hit Parader, horror, I'm Eighteen, In Concert, Killer, Kiss, Love it to Death, Other Awesome Stuff, Rolling Stone, School's Out, Slammed & Damned, The Ballad of Dwight Frye, The Beatles, the Rolling Stones, Theron Neel, West Side Story. Bookmark the permalink. Follow comments with the RSS feed for this post.Trackbacks are closed, but you can Post a Comment.