McT & A Have an Itch for Stacie Ponder

This just in: Itch, the upcoming short film from the burgeoning empire of Kimberly Amato and Michelle Tomlinson (which I wrote about HERE), has found a director. Noted blogger Stacie Ponder—yes, Final Girl herself—has agreed to take the reins and step behind the camera for McT & A’s latest production.

Ponder is no stranger to the visual arts. She got her start as a painter and comic book artist, but a couple of years ago she began tinkering with video cameras. The result was Ghostella’s Haunted Tomb, an entertaining DIY webseries featuring Pretty/Scary queen bee Heidi Martinuzzi, and Taste of Flesh, Taste of Fear, a short film whose cast is made up entirely of fashion dolls. Then, she teamed up with Chainsaw Mafia founder Shannon Lark and headed into the desert with a camera and some booze. The result was the highly anticipated short film Ludlow (which really should be released soon—no, really). At the moment, Stacie is writing and directing the sci-fi extravaganza Space Girls, a webseries about, well, girls in space that “shoot ray guns, fight big monsters, and fly around in rocket ships.” Coincidentally, Space Girls also employs fashion dolls. (I suppose dolls are easy to work with. They don’t cost a lot to feed, don’t expect per diems and never ask about their motivation.) But it also features the voiceover talents of Amanda Deibert, Paula Haifley and Heidi Martinuzzi.

Although Ponder has plenty of filmmaking experience, this project marks the first time she has directed somebody else’s material. Itch was written by Amato, who is also co-producing and co-starring with Tomlinson. When I asked Ponder about her participation, she told me she’s excited, but a little nervous too. “It’s my first time directing for someone else, and my first time with a director of photography. But I’m psyched! I’ve wanted to work with Michelle and Kim for some time, but I never expected they’d hand me a script and say ‘Direct this, please.’ I’m thrilled about Itch. It’s going to be an intense little shoot, and I can’t wait. The blood’s going to fly. In the movie, I mean.” 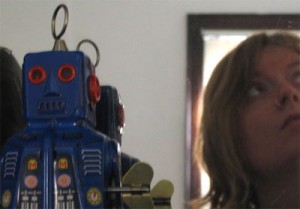 Tomlinson and Amato are equally delighted about Ponder’s involvement. “Asking Stacie to be on board with this project was a no-brainer,” said Tomlinson. “She’s smart, talented, creative and has a strong personality. I’m stoked to finally be able to work with her.” Amato adds, “After watching Stacie’s work, reading her blog and seeing her fantastic grasp of visuals, the decision was a simple one. I’m honored to be working with her.”

Personally, I think Ponder is a good fit for the material. Itch is a twisted little story, and Ponder is slightly warped herself. She also has a wonderful sense of humor, and material like this could benefit from her sensibility. Production begins next week in L.A., with a very tight shooting schedule. Let’s hope Ponder can bring it in on time and under budget. But, hey, no pressure…