I Can’t Believe It’s Not Horror—Stuck

There’s lots of talk about what is and isn’t horror. Usually, the discussion centers on films like Psycho or Silence of the Lambs, or even entire genres like slasher or giallo flicks. While it’s generally agreed these all fall under the umbrella of horror, it can be argued that they don’t. But there are also films out there that are definitely not categorized as horror, but are so dark—either in spirit or deed—that I think they could fit comfortably under that same very scary umbrella. Usually these movies are called dramas or thrillers or mysteries, or anything else the studio marketing department can think of. You know, anything but “horror,” because horror gets no respect. (Don’t get me started.) So, in honor of these misfiled flicks, I want to welcome you to a new semi-occasional, random, intermittent, sporadic feature here at Slammed & Damned: I Can’t Believe It’s Not Horror. In this series, we’ll shine a light into the dark corners of the film world and get acquainted with these horrific gems.

I can’t think of a better film to kick off with than Stuck, the under-appreciated 2007 “thriller” directed by Stuart Gordon and written by John Strysik. It’s no surprise that Gordon is involved with a movie like this, which deals with the always entertaining combination of human nature, self-preservation and very bad decision making. With a career that has included interpreting the works of David Mamet, Edgar Allan Poe and H. P. Lovecraft for stage, screen and television, Gordon is obviously quite comfortable on the dark side of the street. Hell, he pretty much lives there, and god bless him for it. As a director, Gordon is somewhat twisted. He has both an unerring eye and an old-fashioned sensibility, but he never misses a chance to infuse his projects with a grim, sardonic sense of humor. He’s perhaps best known for his wonderful 1985 Lovecraft adaptation, Re-Animator, but an even darker and, dare I say, better Gordon flick is Edmond (definitely a candidate for this series), based on one of David Mamet’s more controversial plays. 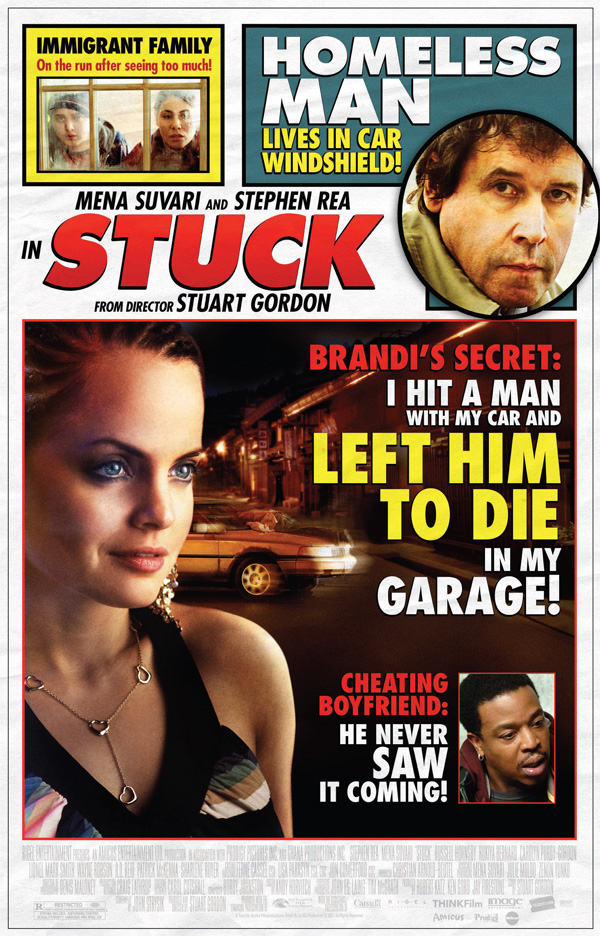 Any writer will tell you the real world is the best inspiration for horror and, accordingly, Stuck is loosely inspired by actual horrible events. The film dramatizes the story of Chante Mallard, a woman who hit a homeless man with her car in 2001 and then drove home, parked in her garage with the poor man still lodged in her windshield, and left him to die.

Mena Suvari stars as Brandi Boski, a caretaker at a nursing home who is a genuinely good person. She truly cares about the elderly people in her charge and really goes the extra mile to help them. Sure, she’s likes to party hard in her off hours—but, hey, who doesn’t? She has a boyfriend, Rashid (a very good Russell Hornsby), who is a genuinely nice guy. Sure, he’s a low-level drug dealer and has a weakness for other women, but he’s there for Brandi when she runs into Tom Bardo (Stephen Rea). And I mean literally runs in to him. Tom is a nice guy as well. Sure, he’s down on his luck and without a home at the moment, but he’s a former professional who’s trying hard to find work. But he’s at that age when it’s easy to get fired and harder to get hired.

Dramatically, the character of Tom serves as the complicating incident, but Rea does all he can with his role—even though he spends most of the flick stuck in a car windshield. The movie is a showcase for Suvari, and she kills it. Suvari’s Brandi is easy to root for and identify with, even when she’s acting selfishly and horrifically. Suvari is skilled enough to make even the most monstrous actions understandable, as is Hornsby. One of Gordon’s strong points is casting and he excels here. Even the smallest roles are filled perfectly.

So, if you’re ever tired of sparkly vampires, boring werewolves or rebooted slashers (and who isn’t?), but you still need to get that darkness of the soul that only genuine horror can provide, I recommend you check out Gordon’s gory Stuck. It’s so good that I can’t believe it’s not horror.