When the Sci-Fi Channel changed its name to SCI FI, I didn’t even realize. But when it rebranded and became Syfy, I was one of those that hated it, complaining long and loud. Here it is almost a year later, and I’ve mellowed. I actually like the new name now. Whatever the channel calls itself, one thing I’ve always loved is its original movies. With titles like Mansquito, Boa vs. Python and Mongolian Death Worm, you know right away what you’re going to see: pure, unadulterated B movie cheesefests. And that’s okay—the makers of these flicks, usually low-budget independent production houses, know that too. They never take themselves too seriously, and sometimes the films are actually pretty good.

If you’ve never had the opportunity to check out any of these movies, now is your chance. Tomorrow (Friday, May 28) starting at 8:00 a.m. CST, Syfy is running an all-day marathon of these wonderfully awful (not to be confused with awfully wonderful) cheap, formulaic flicks. The following is a listing of the movies being shown, along with each film’s official synopsis and any actors of note that might be featured.

Avalanche: Nature Unleashed (2004): Yankee brothers in the Ural Mountains get the cold shoulder from Russian villagers, who refuse to believe a catastrophic avalanche is headed their way.

Fire & Ice (2008): An ice dragon is summoned to save a kingdom from a fire dragon in this fantasy tale. With Amy Acker and John Rhys-Davies.

Post Impact (2004): Survivors of a meteor strike on Earth make contact with others who may still be alive. With Dean Cain.

Sasquatch Mountain (2006): Lance Henriksen (Aliens) and Cerina Vincent (Cabin Fever) star in this horror movie about a monster’s descent from the Arizona mountains to hunt humans tangled up in a botched bank robbery.

Ice Spiders (2007): Vanessa Williams and Patrick Muldoon star in this horror movie about giant spiders that escape from a top-secret lab to wreak havoc on a nearby ski resort. 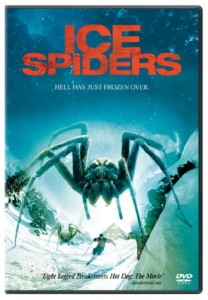 Wyvern (2008): A dragon menaces an Alaskan town. With Barry Corbin and Nick Chinlund.

Yeti (2008): The titular snow monster stalks a college football team after their plane crashes in the Himalayas. With Peter DeLuise and Carly Pope.

Abominable (2006): Matt McCoy and Haley Joel star in this horror movie about a man who spots a Sasquatch-like monster during his stay in a remote cabin. With Jeffrey Combs and Lance Henriksen.

The one thing these movies have in common is their budget—or lack thereof. The money spent to make just one of these flicks is probably less than the catering bill for a standard Michael Bay craptacular. Hell, it’s probably less than he spent on “Megan Fox Is Not Hot” bumper stickers last week. I guarantee the cost of all of them combined is less than Bay spent on special effects for Transformers. And if you ask me, that’s a bargain. The only one of these films that I’ve reviewed is Abominable, which is not terrible. Of the others I’ve seen, I recommend Fire & Ice and Ice Spiders. (I don’t know what it is, but Syfy seems to know how to do ice.)

So, there you have it: a whole day of cheesy sci-fi/horror movies that require no effort, which is actually pretty awesome. Just turn the TV on in the morning and let it play Syfy all day. You can come and go and never worry about needing to know who’s who or what’s happening—absolutely no thinking necessary. I can’t Imagine Greater programming for a holiday weekend. Can you?