Take a Walk on the Dark Side—Contact 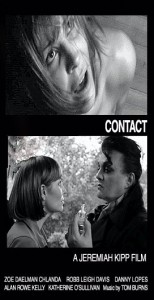 Jeremiah Kipp has toiled long and hard on the New York scene, assisting noted artists such as Alan Rowe Kelly and Larry Fessenden with their films. While he usually acts as assistant or second unit director, he occasionally writes and directs his own flicks. His latest short film, Contact, proves Kipp has learned his lessons well and is more than ready to break out and make his own films full time.

At first glance, Contact seems to be a movie decrying drugs, but I think that’s a lazy description. There’s definitely a story being told and drugs are involved, but the flick is more a tone poem or meditation than an anti-drug rant. Largely dialogue free and shot in moody black and white, the film communicates atmosphere and experience very well. But atmosphere and experience are subjective, and so is Contact. After ingesting a substance that seems to be hallucinogenic in nature, the main character journeys inside herself and doesn’t like what she finds. Yes, her trip is bad but, looked at a certain way, it seems the drug actually allows the right path to open. You have to go through hell to get to heaven.

With Contact, Kipp has constructed a film that’s very interesting, if for no other reason than the extraordinary promise it shows. He’s ably abetted by Dominick Sivilli’s lush cinematography and Zoë Daelman Chlanda’s wrenching portrayal of the lead character. They’ve worked together often, and the chemistry shows. They definitely should continue their partnership if it will lead to more films like this. Bigger and better things await.

Nominally, Kipp works in the horror genre, but you know that the best horror is always about something else, and this flick is no different. Part domestic drama, part freak-out, Contact is a walk on the dark side that will linger in memory long after you’ve seen it. Find out for yourself HERE.