Devi Rolls Another Unlike the Others—trippin’ 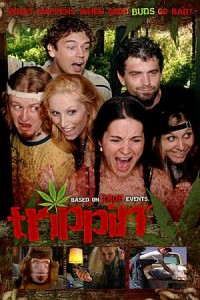 Devi Snively is a sly filmmaker of considerable skill and talent, but she knows she’s standing on the shoulders of giants. For the film fan, her flicks are often a game of spot the shot. While watching her work, I’ve picked up clever nods to several filmmakers, including David Lynch, Tobe Hooper and even Alejandro Jodorowsky. But when I watched trippin’, Snively’s first feature film, the movie I found myself thinking of was Dirty Dancing. I know that sounds strange, but stay with me here.

In my recent piece on her short films, I talk about Snively’s use of recurring themes and her identifiable cinematic sensibilities. I like to think I can recognize her style when I see it. But trippin’ is different enough from her previous films to make me realize that, much like the rebellious Baby in Dirty Dancing, Devi cannot be put in a corner and forgotten about—and trippin’ is no different. Just when you think you have this movie figured out, it takes a left turn and you remember, “Oh yeah, that Devi is twisted.”

Now, trippin’ is allegedly actually, really, truly inspired by actual, real, true events. I don’t know if I believe it, but supposedly Snively was out at a bar one night and met a dude with a gnarly scar on his leg. The story behind the scar was so cool that Snively decided then and there that she had to film it—that film is trippin’. A bunch of stoner friends go into the woods to stay at an isolated cabin. Of course, trouble follows. It’s all pretty familiar territory at first. You know, sex, drugs, rock and roll. But slowly, events start to twist back upon themselves. Then, you suddenly realize trippin’ is not at all the flick you thought it was. And, yes, there’s a puppet. 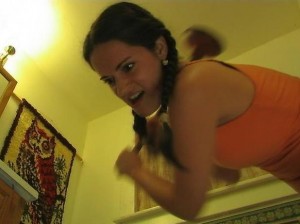 Snively refers to trippin’ as “the garage band of films” and that’s an apt description. She and Team Deviant made the movie a couple of years ago for almost no money. To give you an idea of the budget, her 15-minute film Death in Charge cost twice as much as this feature-length picture. And though the seams do show on occasion, trippin’ is a good-looking flick overall, with some beautiful shots. It was filmed over a period of 16 days, and much of the shooting schedule involved cold, uncomfortable nights spent tromping around the woods. The performances of its ensemble cast are a bit inconsistent, but the end result is extremely impressive considering the conditions they were dealing with.

trippin’ is more than the inane, generic fright fests it riffs on. It’s smart, dark and cunning—much like its writer/director. Don’t make the mistake of thinking you know what Snively will do next, because she’ll most likely surprise you. And in this era of film by committee, that’s an important ability to possess. Let’s pray she uses her power for good.

This article was posted in Reviews and tagged Alejandro Jodorowsky, David Lynch, Death in Charge, Devi Snively, Deviant Pictures, Dirty Dancing, Reviews, Slammed & Damned, Theron Neel, Tobe Hooper, trippin', twisted. Bookmark the permalink. Follow comments with the RSS feed for this post.Trackbacks are closed, but you can Post a Comment.