Too Big for Their Bellbottoms—Village of the Giants 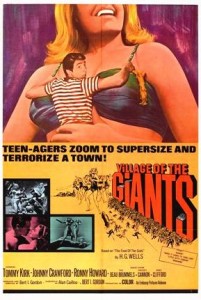 Ever since teens became an economic force back in the 1950s, the fine folks in advertising and marketing have been devising ways to separate kids from their hard-earned money. And if there’s a market to be exploited, you can bet Hollywood is going to sniff it out. Of course, that’s just what happened. In the late ‘50s, it was rock and roll flicks. In the early ‘60s, those evolved into the beloved beach movies. But by the mid ‘60s, fads were passing quickly and the formula was getting rather stale. Frankie and Annette had gone from being chased by Eric von Zipper and the Ratz and Mice to playing with ghosts in bikinis. It was time for something different. And in 1965, with Village of the Giants, that’s just what veteran exploitation filmmaker Bert I. Gordon delivered.

The plot of Village of the Giants isn’t radically different than those of the beach movies. There are good kids and bad kids and dancing and rock and roll and it’s all laughably innocent. But…there are also giants. In a small town outside of L.A., a little boy named Genius (played by an 11-year-old “Ronny” Howard, on leave from his gig as Opie Taylor) accidentally invents a substance, dubbed “Goo,” which causes people and animals to grow to giant size. Trouble comes in the form of a bunch of kids looking for trouble. How do we know they’re bad kids looking for trouble? Because they like to dance in the mud and pour beer on each other. They also like to use tough slang like “don’t make book on it.” These delinquents are led by no other than Beau Bridges, jumping out ahead of his Academy Award-winning brother Jeff in the movie-making race. 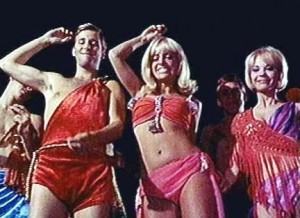 Anyway, these bad kids steal the Goo from Genius and his sister’s boyfriend, Mike (second-tier teen idol Tommy Kirk). Of course, if you introduce delinquents and Goo in the first act, you just know that the troublemakers have to ingest the Goo by the second act (i.e., complicating incident), which they do. The newly made giants decide this is their chance to let the grownups know who’s boss. They take over the town, cutting off all communication with the outside world. (Remember, this was pretty easy to do in 1965.) And to make sure the adults play ball, they kidnap the sheriff’s little daughter. Of course, in the third act, it all goes bad. Allusions to Biblical characters are made, overwrought symbolism emerges and the giants are cut down to (normal) size. 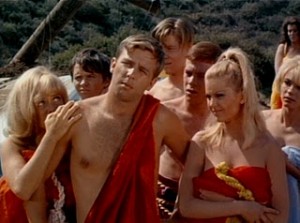 The cast of Village of the Giants is uniformly excellent. Besides Howard, Bridges and Kirk, we have fine performances from Johnny Crawford, best known as Mark McCain from The Rifleman, and noted ‘60s babe Joy Harmon, who you probably remember from Cool Hand Luke, where she showed off her car-washing skills. And I have to mention the groovy dancing on display from Toni Basil, long before her “Mickey” fame. The film’s producers also filled the flick with some lesser rock and rollers, like the Beau Brummels and Freddy Cannon, doing some mostly forgettable songs. One major plus is the wonderfully evocative score by Jack Nitzsche. In fact, the movie’s theme, “The Last Race,” was recently appropriated by Quentin Tarantino, who used it over the opening credits in Death Proof.

Gordon claimed Village of the Giants was based on H. G. Wells’ 1904 novel, The Food of the Gods and How It Came to Earth, and maybe it was. But I think we all know it was really just an excuse to show a group of giant teenagers taking over a small town and standing up to the Establishment. It also offered a chance to show swingin’ chicks in homemade harem girl costumes doing the Pony and the Jerk in slow motion. You have to admit, to a middle-aged producer trying to make a buck off the burgeoning youth movement, it sounds like an unbeatable combination. And you know what? It pretty much is.