Things I Learned at the Movies—The Flesh Eaters

Like any self-respecting monster kid, I spent my formative years planted in front of the television set, watching whatever horror and sci-fi swill Hollywood had to offer a young mind. Time wasted? Perhaps. But I prefer to think of those many hours spent viewing B movies as a kind of alternative education. I learned many useful things studying those crap fests—chiefly, nothing good ever comes of science, deserted islands or Nazis. Think about it. Science is only good for inventing things that will bring about the eventual destruction of mankind. Sure, science is responsible for penicillin, but what good will that do when we’re all dying from radiation poisoning or the blowback from some experiment that went awry and created giant ants or Herculean leeches? Then, there are deserted islands. All they are good for is getting stranded on. And once stranded, the most you could hope for was that you’d find some coconuts to feed on before some indigenous terror hunted you down and fed on you, be it a tribe of cannibals or a monstrous species hitherto undiscovered by civilization. Finally, we come to Nazis. No explanation really necessary there.

Now, I’m going to do you a big favor and give you a little tip. Although it took me the better part of a decade to gather this knowledge, there’s a way you can learn these same lessons in less than two hours. All you have to do is watch little flick called The Flesh Eaters. This baby covers everything I just mentioned and it even throws in a washed-up, hard-drinking actress and a beatnik named Omar as a bonus! This flick is like an honors course in schlock cinema. 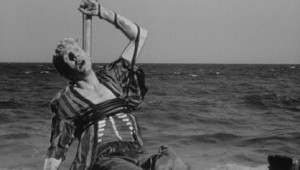 Our story opens on charter pilot Grant Murdoch (Byron Sanders). His hero’s heart was grounded by his trampy ex-wife and he’s been trying to fly away from her memory ever since. Along the way, he’s picked up some financial problems he also can’t escape. Enter boozy, over-the-hill actress Laura Winters (Rita Morely) and her dishy blonde secretary, Jan Letterman (Barbara Wilkin). Winters needs to be flown to the opening of her latest play and she needs to be there immediately. She’ll even pay double…make that triple Murdoch’s usual rate. What’s a broke and broken-hearted flyboy to do? Even though there’s a bad storm on the horizon, Murdoch agrees to take the money and fly. But once they’re in the air, Murdoch’s plane begins to have carburetor trouble, which forces them to land on a deserted island. As soon as they set down, they meet Professor Peter Bartell (Martin Kosleck), a mysterious marine biologist who speaks with a German accent, which, as we know, can mean only one thing: he’s really a Nazi. While our group is getting acquainted on the beach, a skeleton washes ashore. It turns out the water around the island is infested with tiny silver microbes that are phosphorescent or iridescent or incandescent—some kind of –escent. Anyway, these little glowing monsters are flesh eaters and they result from Nazi experimentation. In other words: science. There you have it! Oops, I mentioned something about a beatnik, didn’t I? Then, a beatnik named Omar (Ray Tudor) floats ashore, on a raft with a record player blaring some modern jazz no less, exhorting the weapon of love or some such twaddle. He soon wishes he had a weapon of science to protect him and the others from the –escent flesh-eating microbes.

By the film’s end, plans are made, secrets are revealed, blood is spilled, love blooms and people die. All in all, The Flesh Eaters is a pretty full movie-going experience. The flick was directed and shot in good-looking black and white by Jack Curtis in 1962. It was scripted by Arnold Drake, best known for creating the DC comic books Doom Patrol and Deadman, though he did some work for Marvel as well, creating The Guardians of the Galaxy with artist Gene Colan in 1969. This makes sense because The Flesh Eaters plays very much like a live action graphic novel. The film is helped by a wonderful score, some decent cheese-ball special effects as well as the solid performances of Byron Sanders as The Hero and Martin Kosleck as The Villain. My favorite turn was from Rita Morely as the boozehound actress. Morely plays Laura Winters as a self-aware prima donna who makes no excuses for herself—and steals every scene she’s in with her droll delivery. Barbara Wilkin’s performance as Jan Letterman is mostly distinguished by her willingness to strip down to her bullet bra to make bandages with her blouse. But there’s something to be admired there, I think.

I’m well aware there are many, many other things to be learned from Hollywood, but the lessons The Flesh Eaters delivers, it delivers exceedingly well. Sure, it’s a trifle—but you have to admit it’s a bargain. Three movies’ worth of knowledge in one 87 minute flick? Why sit through three bad movies to learn what one mediocre flick can teach. Oh, don’t forget: There’s a beatnik named Omar! What else does a monster kid need?