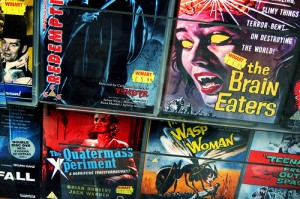 As long as there have been movies, there have been B movies.  Traditionally low-budget, barely publicized affairs, B movies are usually genre films (sci-fi, Western, horror, etc.) featuring actors of little or no repute, often made by small specialty studios and cranked out as if on an assembly line.

Although lesser features, early B movies were popular, profitable, and produced their own separate group of stars, different than the major actors of the day. They also provided an entry into Hollywood for many European directors. Back in the Golden Age, a night at the movies usually consisted of a newsreel, an episode of a serial (such as Flash Gordon or Buck Rogers), several cartoons and a double feature of a B movie and the main feature—an “A movie.” B movies were the first movie and always considered the less important film. 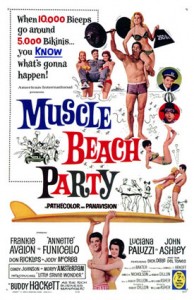 In the 1930s, the predominant B movie genre was the Western.  In the ‘40s, gangster movies and films noir became popular.  In the ’50s, with the rise of rock and roll, the cold war, and the teenager as a social force, B movies exploded into a diverse range of areas: rock and roll flicks, juvenile delinquent and hot rod melodramas, sci-fi/horror pastiches with Red Scare overtones, and foreign films dubbed into English (e.g., the Japanese Godzilla, the Italian Hercules).

The ‘60s B movies saw the rise of the Hammer Films from Britain, the “beach movies” with Frankie and Annette and company, the Elvis movies (which, although they starred the most famous singer in the world, were decidedly low-quality productions), Russ Meyer’s nudie cuties, and Roger Corman’s many low-budget masterpieces. Also, the radical social changes of the ‘60s were reflected in the B films of the day long before they made it to the “legitimate” films.  Of course, the most famous example would be Easy Rider.

The loosening moral attitudes of the ‘60s also helped birth the first gore flicks, courtesy of Herschell Gordon Lewis and David F. Friedman.  Though Lewis and Friedman contributed greatly to B movies, their most influential film was 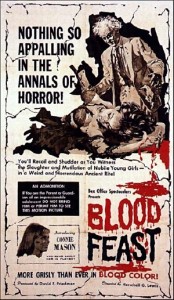 Although the seeds of exploitation were planted in the ‘60s, they definitely came to fruition in the ‘70s grindhouse scene. Martial arts films were a big favorite in grindhouses all over the country. Produced in Hong Kong, often by the legendary Shaw Brothers Studio, and dubbed into English before being distributed in America, these films made stars of Bruce Lee and Jackie Chan and spawned a whole subculture that is still flourishing.

The ‘70s also saw the birth of the midnight movie phenomenon.  The counterculture had come into its own and where better to enjoy themselves than a drug-fueled late-night showing of El Topo or The Rocky Horror Picture Show. By this time, all gloves were off. Pretty much anything taboo was fair game: blaxploitation, sexploitation, women in prison flicks, and, perhaps most influential, hardcore horror—best exemplified by Tobe Hooper’s The Texas Chain Saw Massacre. 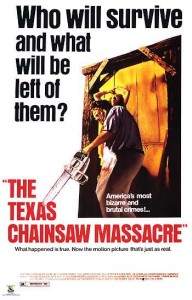 All of this brings us to the ‘80s, the decade in which the low-budget horror film really came into its own.  The success of the cheaply made Texas Chain Saw Massacre and Halloween in the ‘70s bred the Friday the 13th series, The Evil Dead movies, et al., and a veritable ‘80s horror explosion ensued. One of the major forces in B movies during this decade was Lloyd Kaufman and Troma Pictures. Founded by Kaufman in 1974, Troma hit its stride in the ‘80s with films such as Surf Nazis Must Die and The Toxic Avenger.

The rise of the digital age has seen B cinema live on in direct-to-DVD films, which are often sequels to successful films made by major studios such as Disney. The current cost of a feature film averages $50 million to $70 million. With the advances in digital technology, respectable films can be made for a fraction of that cost, making low-budget movies a “too good to be true” proposition for any movie studio worried about its bottom line—which is every movie studio.