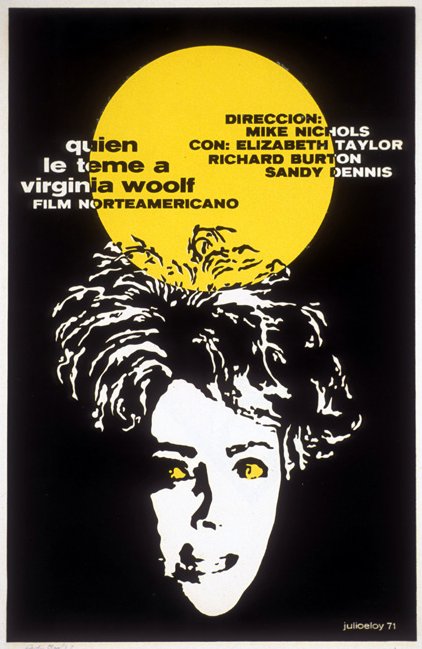 Me, that’s who. Cripes! If you saw this Spanish one sheet but had never seen the flick, you’d definitely think this film was a horror movie. Recounting a few hours in the disintegrating marriage of the ineffectual academic George and the crude Martha, Who’s Afraid of Virginia Woolf? is not a horror flick per se, though there are definitely horrors on display. There are also some great performances, especially from Richard Burton and Elizabeth Taylor. If you think of Taylor only as one of the more beautiful women of Hollywood’s Golden Age, her uncharacteristic turn as the damaged lush Martha is definitely something to see.

While both the film and the play it’s based on, written by Edward Albee, were controversial back in the mid-1960s, neither shocked me as much as this poster did. I mean, look at it. True, Martha is a monstrous character, but this one sheet makes her look like a crazed vampire witch. I’m guessing that’s supposed to be a full moon above her, which subtly ties the “Woolf” of the title to “werewolf.” (Coincidentally, this film’s director was Mike Nichols, who decades later directed Wolf. Weird, eh?) Actually, the title Who’s Afraid of Virgina Woolf? is a play on the song “Who’s Afraid of the Big Bad Wolf” from Disney’s The Three Little Pigs. But a literal translation of the film’s Spanish title totally screws up the pun. Overall, I think the poster succeeds at communicating the existential domestic horror explored in the film. More important, it makes me want to see the flick. And that’s what a movie poster is supposed to do—in any language.

This article was posted in Other Awesome Stuff and tagged Disney, Edward Albee, Elizabeth Taylor, horror, Mike Nichols, Other Awesome Stuff, Richard Burton, Slammed & Damned, Spanish, The Three Little Pigs, Theron Neel, vampire witch, Who's Afraid of the Big Bad Wolf, Who's Afraid of Virginia Woolf?, Wolf. Bookmark the permalink. Follow comments with the RSS feed for this post.Trackbacks are closed, but you can Post a Comment.