I just read an interesting article in The New York Times on the state of branding in Hollywood today. We all know branding is a big deal in the entertainment industry. But it’s not just in showbiz—it’s everywhere in society. We are assaulted by brands every moment of every day. Take a drive down any freeway and billboards pummel you with brands and logos. Hell, just take a walk through your home and you’ll see brands everywhere. No, really. Go ahead. I’ll wait. See what I mean? Maybe you didn’t notice ‘em before, but they’re there, peeking out at you from the pantry and the refrigerator, from the closet and the laundry room. At this point, they’re like old friends. Wow, there’s my buddy Nabisco! Hey, Starbucks, looking good!

But that’s the way of the modern world. We’re used to it. So why shouldn’t brands be merged into film and television. If we want realistic entertainments that reflect the world we live in, we need integrated branding. Everybody has seen thrillers where a character in peril hops on a computer and pulls up some invented search engine. If you’re like me, you groan and say to yourself, “Ugh. ‘Data Seek’? Really? Where’s Google? Sheesh!” That totally destroys the reality of the moment. So, it follows that branding is a good thing, right?

Well, it can be. But when the branded companies in question get a say in how their products are presented, the issue becomes cloudy. Yeah, we want to see our favorite action hero drink a Budweiser. But when Anheuser-Busch can decide that our hero will drink in a classy fern bar instead of a shitty dive bar, there’s a line being crossed—the corporate sponsor is dictating content and tone. The problem is, most producers really don’t care about that line. There is money to be made mollifying major corporations, and films cost millions of dollars to make. Who can blame the producers for wanting to offset the cost. Of course, we’d all prefer they do so tastefully and with discretion. Some TV shows, such as The Office and 30 Rock, have managed to incorporate product placement creatively, earning both laughs and revenue. 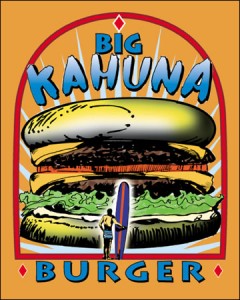 I’ll admit, I’m a bit wishy-washy on the whole matter. Some filmmakers have sidestepped the issue by filling their flicks with invented, fictional brands. Remember Big Kahuna Burger in Quentin Tarantino’s films? That’s a clever approach, but it goes toward creating an internal mythology that won’t work in most movies. Besides, the Weinsteins gave fledgling director Tarantino a lot of leeway back in the ‘90s. These days, a new filmmaker would never get such a break. If Tarantino were starting today, Pulp Fiction might look very different. I can picture big, bad Harvey Weinstein saying dismissively, “Big Kahuna Burger? Cute. No, we’re already meeting with Whataburger. By the way, they don’t want Jules and Vincent to shoot those guys. Maybe they can just insult them. Think about it.”

There’s a new economic reality in Hollywood today. And one of its cornerstones is finding as much corporate financing as possible. All I can ask is that the money men respect film as an art form. Heh. Yeah, that’ll happen.

This article was posted in Other Awesome Stuff and tagged 30 Rock, branding, Budweiser, Google, Harvey Weinstein, Hollywood, Nabisco, Other Awesome Stuff, product placement, Pulp Fiction, Quentin Tarantino, Slammed & Damned, Starbucks, the Horror, The New York Times, The Office, the Weinsteins, Theron Neel, Whataburger. Bookmark the permalink. Follow comments with the RSS feed for this post.Trackbacks are closed, but you can Post a Comment.