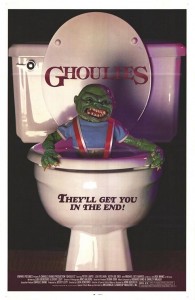 One of the best things about having an open mind is the chance it provides for redemption and rediscovery. Take Ghoulies, for instance. I saw this flick on its release back in 1985 and immediately wrote it off as a lesser Gremlins, as did many others. Then I promptly forgot about it. But I saw Ghoulies again recently and a whole new opinion revealed itself. I was amazed. How had I dismissed this fun, goofy horror movie?

Originally set to be a Charles Band film, Ghoulies ended up being the directorial debut of Luca Bercovici, best known in my house for directing The Granny (which I really have to review some day). Band kept his hand in Ghoulies by releasing it through Empire Pictures, the predecessor to his production house Full Moon Features. While Full Moon may be the more famous of the two companies, Empire had a pretty good track record, releasing such classics as Re-Animator, From Beyond, Trancers, Troll and Dolls before it closed. But as the highest-grossing independent film of 1985, Ghoulies is arguably Empire’s greatest success. And why not? Ghoulies has a little bit of everything: Satanic mumbo jumbo, corpses rising from the grave, over-the-top performances, little people dressed up as demons,  little puppets dressed up as demons, a surprisingly effective love story, a baby-in-peril subplot, bad ‘80s fashion and music, the innocent celebration of drugs and alcohol, bad break dancing (the result of the innocent celebration of drugs and alcohol), the wonderful Jack Nance (post-Eraserhead, pre-Twin Peaks), the film debut of a sweet Mariska Hargitay (before all the SVU perps wore her down), former glam rocker Michael Des Barres as a devil worshipping megalomaniac (see “over-the-top performances” above) and—perhaps best of all—the use of that awesome horror movie phrase: “Let’s do a ritual.”

The plot of Ghoulies is incidental at this point and not really necessary to understand the film’s charms. The act of writing about it has made me realize why this flick is so good in 2010: nostalgia. Although I bemoaned the ‘80s while they were happening, the passage of time has provided a pair of rose-colored glasses that I seem to be wearing more and more these days. Sure the clothes and music were sadly misguided, but I was younger—so, how bad could that decade have really been?

Granted, this revelation throws my whole review of Ghoulies into questionable territory. I seem to be recommending this movie only if you are above a certain age, but that’s not the case. If you have an open mind, or if anything in the last half of the second paragraph appeals to you at all, check out Ghoulies. If you don’t like it…okay, I get it: I’m old.