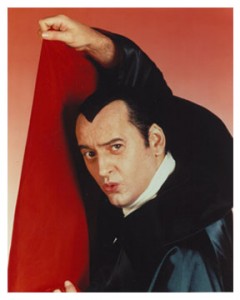 Recently over at The Vault of Horror, dungeon master supreme B-Sol posted a Top 10 list of noted TV horror hosts. It was a fairly comprehensive collection, but I noticed one glaring omission: the incomparable Count Floyd from SCTV. True, this oversight might have something to do with the fact that Count Floyd wasn’t “real,” whatever that is. But truth be told, he was always real to me.

Hopefully, my readers are hip to SCTV. But if not, SCTV (Second City Television) was a syndicated sketch comedy show from Canada that ran in the late ‘70s. Several brilliant performers began on SCTV before moving on to stardom of varying degrees: John Candy, Catherine O’Hara, Harold Ramis, Andrea Martin, Rick Moranis, Martin Short, Eugene Levy and Joe Flaherty, among others. Ahead of its time, the show was meta before meta was meta. It was satirical in nature and all the sketches were based on the running gag that the viewer was watching an actual independent TV network that ran for just 30 minutes a night (much like Fox when it began). All the sketches took place in that universe and many involved the station’s bad programming, which allowed for a wide range of parody. SCTV ran everything from soap operas and local news programs to talk shows and film spoofs. And that’s where Count Floyd comes in. 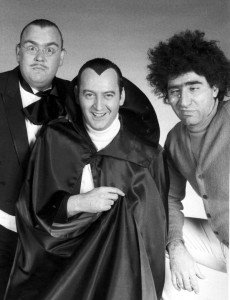 As host of SCTV’s very low-budget Monster Chiller Horror Theater, Count Floyd is the quintessential local TV horror host. Played by Joe Flaherty, Count Floyd is the alter-ego of SCTV news anchor Floyd Robertson. (SCTV is such a low-rent station that the employees have to do double duty.) Robertson, who sees himself as a respected newsman on a par with Cronkite, is obviously angry about having to lower himself by appearing as the station’s horror host—and it shows. Count Floyd is constantly muttering to himself about his deplorable situation, even while he tries to improve it. One of the staples of Monster Chiller Horror Theater is 3-D movies, and Count Floyd is constantly hawking 3-D glasses to his young audience, at outrageous prices he obviously makes up on the spot.

Flaherty as Floyd Robertson as Count Floyd is a wonderful creation. Count Floyd is a dreadful host. He dresses in a cape, wears vampire makeup and speaks with a corny Transylvanian accent. In an attempt to whip up enthusiasm, he punctuates seemingly every other sentence with a lame werewolf howl. Granted, he needs to do whatever he can to excite his viewers, because Monster Chiller Horror Theater’s movies stink. One of the running gags involves the awful packages of films SCTV buys. Often, the flicks Count Floyd has to show aren’t even horror—but they allow SCTV to do some hilarious parodies.

As I mentioned, Monster Chiller Horror Theater often showed 3-D movies, usually from the “Dr. Tongue” series (Dr. Tongue’s 3D House of Stewardesses, Dr. Tongue’s 3D House of Cats, et al.). One of my favorite selections is Whispers of the Wolf, a pitch-perfect parody of a Bergman film, which apparently was forced on Count Floyd because it has “wolf” in the title. At its conclusion, Flaherty as Robertson as Count Floyd is priceless as he shows us what existential hell it is to be Count Floyd.

SCTV is largely forgotten these days. It never reached the level of fame that Saturday Night Live achieved, but it remains a smarter, funnier program. There are DVDs available, and many clips are on YouTube. The show had several very funny characters but, for obvious reasons, Count Floyd will always be my favorite. Wherever you are now, Count Floyd, take care. I know it was hard to be you. Rest easy in the knowledge that you did all you could with what you had—some might say that’s the very definition of “hero.” I’d agree with them.