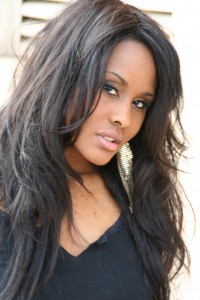 I have a treat for you today, my friends: an interview with a vampire! No, really. At great peril, I’ve tracked down Paquita Estrada, a beautiful bloodsucking ghoul, and forced her to answer questions just for you, dear readers. But wait, there’s more! Paquita isn’t just a vampire—she’s a zombie too (maybe). In the “real” world, Paquita is an actress. In fact, Paquita is one of the stars of Planet of the Vampire Women, Trash Film Orgy’s upcoming space pirate vampire flick. She plays Captain “Trix” Richards, the most notorious, badass space pirate/vampire woman in the galaxy. And as you’ll see, she’s very, very excited about it.

Hey Paquita! I’ve already interviewed several members of the cast of Planet of the Vampire Women, but I believe you’re the first vampire I’ve spoken with. How do you like playing a bloodsucking fiend?

Oh my god! I loved it! I’ve been in love with vampires since I was little girl, from Interview with the Vampire to Vampire in Brooklyn. Not to mention I am a space geek, so the idea of playing a space pirate turned vampire was a dream come true.

What can you reveal about your character?

Captain Richards loves Skittles. She always hides them from her crew under the arm of the captain’s chair. Oh yeah, she loves boobs.

I was online looking for work and came across their ad on craigslist. I read the title and knew right away that this was a project I had to be part of. When I read the part of Captain Richards, it felt like they wrote it with me in mind—of course, they didn’t because they didn’t know me then, but that’s how passionate I was about getting cast as Richards. I knew I was the Captain and I had to make them see that too.

You do seem pretty excited, I have to say. Tell me, you’ve worked on other movies. Is working on a vampire flick any different than your usual film work?

No, not really. On every set, you wait around for umpteen hours until it’s your time to make movie magic. You’re always sore at the end of the day; but the places you’re sore is what’s different, like having the veins in your neck sore from having to bare fangs over and over or having to drive home covered in dried blood, wrapped in clear plastic. But if I had to do it all over again, you can bet your O-negative blood that I would!

Yikes! Okaaay. As an actor, how do you prepare to be a vampire? Did you watch a lot of scary movies, or did you just let the fangs fly?

I let the fangs fly [laughs]. Like I said, I love vampires and felt that there was always a space pirate vampire inside of me waiting to come out and Planet of the Vampire Women released her! 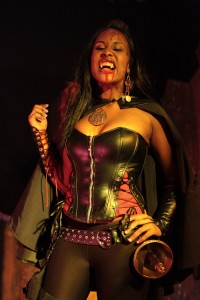 Always, always, always! I remember as a child as young as 3 watching Tales From the Crypt, Twilight Zone and Scooby Doo—

Hey, that cartoon can be scary for a 3- or 4-year-old! My all-time favorite scary movie is The Exorcist, the uncut version! Even now as an adult, I rarely pass up an opportunity to watch a scary movie. But lately, Hollywood has left me disappointed—nothing seems to scare me anymore, I think I’m desensitized now. Hollywood, take that as a challenge. Write something that can scare me please.

Hear that, Hollywood? You’ve been called out! Okay, Paquita, I see from your resume you’ve been in Maxim magazine. Details, please…

I’m one of those women who understand the industry and I don’t mind using my looks as an actress to get me noticed, and then blow them away with my talent later. I was entered in [Maxim’s] “Hometown Hotties” competition without my knowledge by my boyfriend at the time. Maxim called me and told me that they wanted to use my picture as an advertising tool in their magazine for a two-month spread. The ad read, “If your girlfriend looks like this, enter her in the Hometown Hotties competition.” It really stroked my ego, if you could imagine. They also contacted me to be on their reality shows, but I was pregnant with my son and was unable to.

Yeah, Maxim is kinda shallow like that. Can you tell Slammed & Damned’s readers what’s next for you, Paquita? Zombies maybe?

I, of course, love zombies—running zombies are the best. I am currently working on a short called Vaccinated, and it is about zombies. You’ll have to wait and see if I turn in to one or not. I have several other things I’m working on right now—three are in the horror genre. As long as I am an actress, I will try to continue doing horror movies. Some people like to make people laugh. I like to scare the heck out people.

A vampire after my own heart…