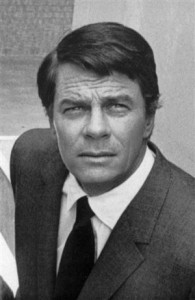 It is with sadness I relate that actor Peter Graves has died of a heart attack. He was 83. This is been a rough week. First Corey Haim dies, now this. Besides sharing a fame that had passed, these two actors had another thing in common: While they were best known for other roles, they both appeared in horror films that I will remember them for. Haim had The Lost Boys. Graves had It Conquered the World.

Granted, It Conquered the World isn’t all that good, but it almost perfectly epitomizes the ‘50s B-grade sci-fi/monster movie. Made in 1956 and directed by the legendary Roger Corman, the flick tells the story of an alien from Venus with plans to, well, it’s all right there in the title. The creature (which, in his intro to “Cheepnis,” Frank Zappa described accurately as looking “sort of like an inverted ice-cream corn with teeth around the bottom—it looks … like a teepee or a sort of a rounded-off pup tent affair”) hopes to achieve world domination using a disgruntled scientist, played by Lee van Cleef, who has been duped by the alien’s promises of a better Earth through eradication of emotion. Graves played the scientist’s best friend, who eventually talks some sense into his misguided buddy and aids in saving the day. As a kid, I loved this movie. It has everything. There’s mind control, adults with marital issues, monsters in rubber suits, space command malarkey, blowtorch monster repellent and caves. When it’s on today, I usually don’t make it all the way to the end, but I always see enough to satisfy my desire for cheese. 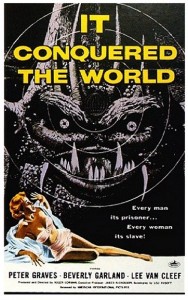 The career Graves crafted for himself was long and full of every kind of role imaginable. Though he’ll always be best known for Airplane! and TV’s Mission: Impossible, Graves made several notable, and not so notable, horror/sci-fi flicks, including Red Planet Mars, Killers From Space, The Eye Creatures and The Clonus Horror. But my other favorite horror work from Graves is a barely remembered 1974 TV movie called Scream of the Wolf.

Scream of the Wolf has a wonderful pedigree. It was directed by Dan Curtis, who was The Man in ‘70s televised horror. Do the titles Dark Shadows and The Night Stalker mean anything to you? Well, Curtis is the guy responsible for both of those horror touchstones. Also involved in Scream of the Wolf was legendary writer Richard Matheson, who wrote the flick’s teleplay. Matheson is one of the most famous and influential genre writers of all time. He wrote the novel I Am Legend, several of the best Twilight Zone episodes as well as novels that were adapted into the films Stir of Echoes, The Legend of Hell House, Duel and Somewhere in Time, among many others. Furthermore, three of his short stories were adapted in the original Trilogy of Terror (yes, the tale of the Zuni fetish doll is his). Now, Scream of the Wolf isn’t one of Matheson’s better stories, but it is great disposable entertainment. C’mon, werewolves, Richard Matheson, Peter Graves, Dan Curtis, 1974—isn’t that enough to make you a little curious? (What if I throw in ‘70s fox Jo Ann Pflug?)

The ‘70s were full of supernatural-based TV movies that were meant to be seen once and then forgotten. And that’s what Scream of the Wolf was. But when I heard that Graves had left us, I remembered it. I don’t know what that says about me, but I do know that Graves will be recalled fondly by myself and others. For a TV kid from the ‘60s and ’70s, Peter Graves was a part of daily life. His movies ran constantly and I saw Jim Phelps accept impossible missions almost every day. All I can say is Mr. Graves, your mission, which thankfully you decided to accept, is completed. Get some rest, friend.