As you probably know by now, actor Corey Haim was found dead this morning. And it’s no surprise the cause appears to be an accidental overdose. His drug problems have been well documented and led to a very public flameout a few years ago. To his credit, he spoke openly about his struggles:

“I lived in Los Angeles in the ‘80s, which was not the best place to be. I did cocaine for about a year and a half, then it led to crack. I started on the downers, which were a hell of a lot better than the uppers because I was a nervous wreck. But one led to two, two led to four, four led to eight, until at the end it was about 85 a day—the doctors could not believe I was taking that much.”

But I don’t want to belabor the troubles he had. He’s been an easy target for too long. I want to focus on the good. Haim was an entertaining screen presence who made several enjoyable movies during his career. And while he will never be remembered as a horror actor, I guarantee he’ll always be remembered for two wonderful horror flicks he made back in the ‘80s. 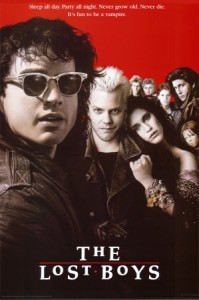 Silver Bullet, released in 1985, was based on a Stephen King book. It’s one of the better adaptations of King’s work and a large part of the credit belongs to Haim. The movie is one of those coming-of-age stories that King does so well. You know, the kind where life-changing events lead the main character to look back and say, “It was never the same after that summer.” Well, the life-changing events in Silver Bullet involve a wheelchair, a werewolf…and Gary Busey. Haim played Marty, a disabled young boy who is the hero of the tale. The role required a lot from Haim and he definitely delivered. He more than held his own in his many scenes with the scenery-chewing Busey, which says a lot about the then 14-year-old Haim’s acting ability.

But I think Joel Schumacher’s The Lost Boys is most likely Haim’s crowning achievement. Released in 1987, this flick is probably responsible for igniting the whole teen vampire movement that resulted in Buffy the Vampire Slayer and Twilight. It was also Haim’s first movie with his close friend Corey Feldman. “The Two Coreys” went on to make another seven films together, as well as star in a depressing reality show. But The Lost Boys finds them in happier times, fighting a coven of teen vampires led by a charismatic Kiefer Sutherland. This flick had everything going for it: a great script, a fantastic supporting cast, exciting set pieces and memorably quotable one-liners (“Death by stereo!”). Haim’s scenes with Feldman and co-star Jason Patric allowed him to demonstrate his boyish charm and deft comic ability, both of which he used to good effect in ‘80s “must-see” flicks such as Dream a Little Dream and License to Drive.

I suppose we all kind of knew how it would end, but that doesn’t make it any less sad. I enjoyed Haim’s movies when I was younger, and when I see them on cable today, I still smile and laugh. And that’s how I’ll always remember Corey Haim. Smiling and laughing.