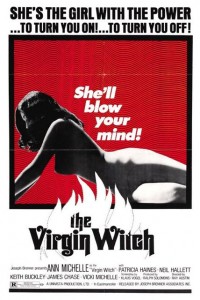 The 1971 British “horror” flick Virgin Witch was somewhat notorious in its day. While it was initially rejected by the British Censor, the Greater London Council eventually gave it an X rating. Now, I’m not sure how that would translate into an American rating. Personally, I’ve never been able to figure out the British monetary system, let alone their labyrinthine systems of education and film rating. One thing is for sure, this movie has only one thing on its mind: sex, sex, sex. That’s made abundantly clear in the opening credits, where each name is accompanied by nude women. And though the rest of the flick is somewhat tame by today’s standards, its boldness still feels a little shocking. Funny how that works, isn’t it?

Sisters Christine and Betty (played by real-life sisters Ann and Vicki Michelle) run away to the big city to become models. On the way to London, they get a ride from the conflicted hero-to-be Johnny, who warns them to beware unscrupulous photographers who have only one thing on their mind. This is ironic, because Johnny has the same one thing on his mind. Actually, this is a film where everyone has sex on their mind—especially Sybil Waite (whose name I assume is derived from witch Sybil Leek and the classic Rider-Waite Tarot deck). Sybil is the owner of the modeling agency to which the Christine goes to find work. As soon as the leering Sybil lays eyes on Christine, it’s all she can do keep her tongue in her mouth and her hands to herself. Christine can’t help but notice and plays it for all she can. It quickly becomes obvious that this girl is willing to do whatever (and whoever) it takes to succeed because, as she puts it, she’s a “career girl.” We know something is awry when Sybil immediately sets Christine up on a phony modeling assignment to take place at a countryside manor house called Wychwold (this name should’ve set off some alarms). 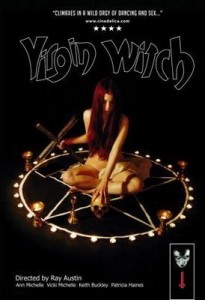 When Christine arrives at Wychwold with the innocent Betty in tow, things begin to take off—things like clothes, that is. Before long, she’s making it with a fashion photographer in the woods, much to Sybil’s dismay. Meanwhile, Betty discovers a sinister ritual room in the manor house. Betty also discovers the smarmy owner of the house, Gerald Amberly, who is the high priest of a coven that, coincidentally, is holding a sabbat that very evening. It seems Sybil, who serves as high priestess, has procured Christine to be the sexual component of the ritual. Of course, Christine is thrilled at the prospect. In fact, she’s so thrilled that she asks if she can become a witch too. (Like I said, anything and anybody.) Apparently, Gerald sees great power in Christine (heh) and agrees to “initiate” her immediately.

After a wild ritual with Gerald and a wilder night with Sybil, Christine is nigh unstoppable. Though she became a witch only the night before, Christine awakes with the power of pyrokinesis. But that’s not all. She can also control whomever she chooses, and she chooses pretty much everyone around her. It’s soon clear that Christine is power mad and out to claim Sybil’s role in the coven—but at what price?

Overall, Virgin Witch is a nice looking flick—quite atmospheric and full of the era’s filmmaking artifacts, such as fast zooms and trippy editing. Whether lulling with sophisticated melodies or alarming with atonal wails, the score is very effective in establishing and maintaining mood. For me, the high points of the movie are the two ritual scenes. While the high priest and penitent are humping away on the altar, the rest of the coven starts swaying rhythmically back and forth. But as the altar action heats up, the coven breaks into gyrations that wouldn’t be out of place in a go-go bar. Yes, the hills are alive with the Watusi and the Frug! But even with all the nudity and psychedelic effects, the refined British aura definitely leaks through. Director Ray Austin’s camera lovingly documents stately greens almost as much as it ogles naked women. Leave it to the Brits to try to class up sexploitation.

Essentially, what we have in Virgin Witch is a British witchcraft nudie version of All About Eve filtered through a late ‘60s sensibility. It feels a little like a film that would be made by Hammer Studios’ smuttier cousin. Of course, by this time, with flicks like The Vampire Lovers, Hammer was well on its way to becoming its own smuttier cousin. But Hammer never made anything as salacious as Virgin Witch. Not even close. And I can’t think of a better reason to see it. Can you?