Still Cleaning Off the Blood 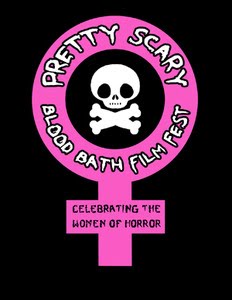 I just returned from the Pretty Scary Blood Bath Film Fest, so excuse me if my usual ramblings are less than coherent. The weekend was an orgy of blood, booze, absinthe and automobiles (in various unexpected combinations) so I’m a bit spent, but I will do my best to share my thoughts. In case you didn’t read THIS, the PSBBFF is a fest, sponsored by Damnation Books, that celebrates the work of female horror filmmakers. This was the festival’s first year and I was mightily impressed with the talent on display. I’m not going to review each and every flick that played—that would take way too long. But I will touch on a couple that really made an impression.

First off, look out world—here comes Emily Hagins. Hagins is a 17-year-old high school student from Austin, Texas, who is also a budding auteur. Though she’s been making short films since she was a kid (I mean a littler kid), she made her first feature, Pathogen, when she was 12 (!!). Her latest film, The Retelling, which opened the festival, is an ambitious tale of past sins that come back to haunt a family. This flick’s storyline is tricky, and while Hagins’ chops aren’t yet quite developed enough to effectively realize a narrative this complex, the film she’s made on a $9,000 budget is remarkable. She’s written a deep, compelling story, with wonderful dialogue, and turned out a movie that shows a phenomenal grasp of filmmaking skills. As a director, Hagins gets amazing performances from her actors, most of whom were beginners. The Retelling looks much more expensive than it was and though it doesn’t succeed completely, it’s an impressive achievement for any indie filmmaker, let alone one so young. During a Q&A, Hagins said she’ll worry about her next film after she finishes her SATs. First things first, Emily… 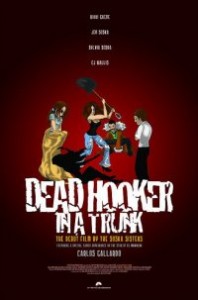 The next flick I have to mention is, of course, Dead Hooker in a Trunk. Made by the Canadian twin filmmaking team Jen and Sylvia Soska, Dead Hooker tells the story of twin sisters who are complete opposites in every way, but learn they’re more alike than either would ever have believed. Yes, it’s the most disturbing feel-good movie I’ve ever seen. Funny, violent, gory, unsettling, gratuitous, excessive and kick-ass, the flick the Soska twins have delivered is the unlikely combination of utterly derivative and wholly original. At various points, I was amazed, amused, appalled, grossed out, disgusted, delighted, confused and restless—but I was never bored. The Soskas could have fixed the “restless” issue by delivering a flick that was about 10 minutes shorter, I think. The film tells the story of four people that find the body of a hooker in their car trunk, and that is the highlight of their weekend. I left Dead Hooker in a Trunk with one main thought: It’s nice to know that women can make a film that is as bizarre and fucked up as anything made by a male. It also disproves the misconception that all Canadians are nice and normal. Way to go, ladies! Twisted Twins indeed.

Everything else playing the fest kind of ran together. Nothing was bad, but other than the fun Mis-Adventures of McT & A, only one other piece stood out for me. In fact, the short film Death in Charge might be the best thing I saw all day. Devi Snively’s movie is a darkly comic reverie that finds Death in the unexpected positions of pupil, teacher and caretaker. The shifting tone of Snively’s short was masterfully balanced—comedy gave way to tragedy, which gave way to wonder, and then inevitability. The flick was deeply affecting in ways I wasn’t expecting. Though I went in to the fest vaguely aware of her, I now can’t wait to see Snively’s upcoming feature, trippin’. 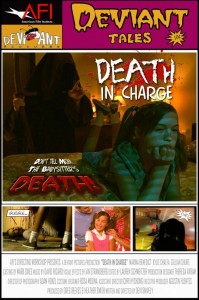 I skipped the festival’s after-party. I was pretty wasted from a full day of female-centric horror. The party was supposed to be my chance to schmooze but, truthfully, I’m such a social misfit that I would’ve just grabbed a beer and stood in a corner staring at the floor anyway. I did see Pretty/Scary founder Heidi Martinuzzi at the fest. We’ve exchanged the occasional email and she’s always been extremely nice to me. I meant to introduce myself, but every time the opportunity presented itself, she had people all around her and I didn’t want to add to her confusion. I finished the night hanging with some good friends, eating pizza and watching more horror movies. Trust me, it was the best way to end an already fantastic weekend. But next year, I’m gonna be an in-your-face networking mofo. No, really!

This article was posted in Updates & Teasers! and tagged Damnation Books, Dead Hooker in a Trunk, Death in Charge, Devi Snively, Emily Hagins, Heidi Martinuzzi, Jen and Sylvia Soska, Mis-Adventures of McT & A, Pretty Scary Blood Bath Film Festival, Pretty/Scary, Slammed & Damned, The Retelling, Theron Neel, Twisted Twins, Updates & Teasers. Bookmark the permalink. Follow comments with the RSS feed for this post.Trackbacks are closed, but you can Post a Comment.