Now Playing at the House of Grind—Horrors of Spider Island 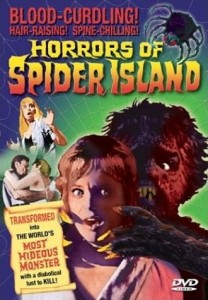 Welcome to Slammed & Damned’s periodically irregular, occasionally infrequent, sporadically intermittent, randomly occurring new feature called “Now Playing at the House of Grind.” Just so you know, the House of Grind is neither a burlesque house nor a coffee house—but if all goes well it should provide a jolt. No, the house I’m referring to is a grindhouse, one of those broken-down movie palaces on the wrong side of town that played gloriously bad exploitation flicks roughly 35 years ago…only this one is located in my living room on the mediocre side of town in the now. Fair warning: The flicks I watch for this feature won’t always be horror, but I promise they’ll always be of questionable taste and quality.

Our first House of Grind selection is called Horrors of Spider Island. Well, that’s one of its names. It’s also known as Ein Toter hing im Netz (A Corpse Hangs in the Web), Girls of Spider Island and The Spider’s Web. Actually, the version I watched has the delightful title It’s Hot in Paradise. Apparently, the name of this movie depends on the cut you’re watching. Trim away the brief nudity and you have Horrors of Spider Island. Leave the nudity in and you have It’s Hot in Paradise. No matter what it’s called, you have to give the producers credit for one thing—they sure know how to hedge their bets. It’s a little bit horror and a little bit sexy. In fact, there’s a little something here for everyone—too bad none if it is very good. 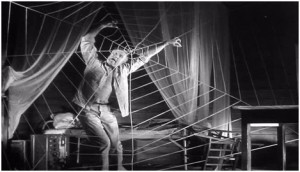 Shot in muddy black and white in 1960, Horrors of Spider Island is a German/Yugoslavian co-production. (Isn’t it nice that Yugoslavia doesn’t hold a grudge? Or, based on the quality of this flick, maybe it does.) Director Fritz Böttger has given us the touching story of Gary (Alexander D’Arcy), a swinging nightclub owner, and a bevy of busty burlesque beauties he’s flying across the ocean to “dance” in his club in Singapore. They hit a rough patch when their plane crashes into the sea and Gary and troupe are left floating in a life raft. But luck soon shines in the form of an island, which they are able to reach before they drive each other (and us) crazy. Once they land, they find fresh water and—what’s that?—a cabin! And what’s that in the cabin? A dead man hanging in a giant spider web. Dammit! Make up your mind, Fate. 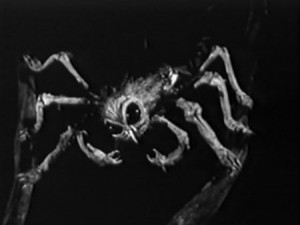 It seems the dead man was a professor who was mining for uranium. Luckily, he found it. Unluckily, he also found death. Gary and the gals are upset, but they cheer up when they realize there’s enough food and drink to last a while. Later that evening, Gary decides to go exploring alone. Bad move, Gary. Of course, Gary meets the giant spider that killed the professor. Now, this spider isn’t giant giant. It’s more the size of a big cat—but still, pretty big for a spider. Luckily, Gary kills the spider. Unluckily, the spider bites Gary, who immediately morphs into a man-spider beast, with cheesy claws and a bad mask. Soon, the girls are dropping like flies as Spider-Gary picks them off.

A few weeks later, the remaining girls are frolicking on the beach. Luckily, they spot a ship off the coast of the island. Unluckily, they aren’t able to signal it. Luckily, a couple of guys row to shore with supplies for the professor. Soon, they’re all getting acquainted with whiskey and dancing. Unluckily, the girls are soon fighting over the guys. Luckily, they work it out. Unluckily, Spider-Gary kills again. Luckily, they kill the beast and live happily ever after. Un—no, that’s it. Well, at least it ends on an up note. 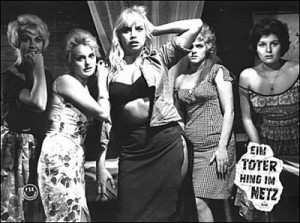 While, overall, this movie is pretty meh, it ain’t all bad. It opens with an awesome scene that finds Gary auditioning the dancers. He parades each girl in and has her do her thing, be it hepcat dancing or stripping down to her undies. I have to say that the score is freaking sweet. These chickies have some groovy tunes to move to. One interesting thing this movie reveals is the zeitgeist change in what is considered sexy. Know that these fleshy girls would be considered quite full-figured in these days of aerobicized bellies and butts. So, if you’re considering seeing this flick for a slice of cheesecake, it might not be the flavor you prefer. Also, if you’re considering this flick as sexploitation fodder, you should know the nudity is limited to distant shots of the gals swimming—not much is on display. And though this flick has “roughie” aspirations, it never comes close enough to qualify.

One of the worst things about Horrors of Spider Island is the dubbing. Every actor’s voice is dubbed, and the worst is all the women. We seem to have European actresses dubbing very bad American accents. This flick might be worth a rental just to hear a bad European actress doing a worse Southern accent. Oh, and I have to mention the terrible day-for-night shots. A large part of the flick takes place at night…but it’s obviously day time. And I mean obviously. The shots rarely match as they switch from day to night to day/night to night/day. (Though I haven’t seen it, MST3K goofed on this movie, and that might be the best way to see it. I’m sure they had a blast with it. It’s perfect for their purposes.) 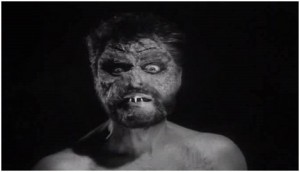 The only actor of note here is Alexander D’Arcy, as Gary. He had a nice career in the ‘30s, co-starring alongside the likes of Cary Grant, Irene Dunne, Billie Burke, Constance Bennett and Ralph Bellamy. Oh how the mighty fall. But hey, he’s an actor, right? A man has to work. This gig provided a trip to Europe and a chance to play with some zaftig Eurobabes. What’s a guy in his 50s to do?

Horrors of Spider Island gets more wrong than right, which means it’s an average grindhouse flick. The biggest problem with this film is there’s not enough nudity for a decent exploitation movie and not enough horror for a good creature feature. So, it’s more sizzle than steak. But, I ask you: Isn’t that what the grindhouse was all about?