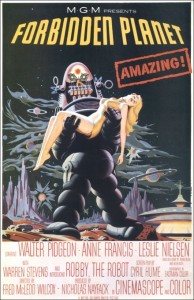 So, how great is this movie? Forbidden Planet, made in 1956 and directed by Fred M. Wilcox, is still one of the best sci-fi flicks around. But why is it so great? Maybe it’s the wonderful futuristic set design or the little micro-mini skirt that the forward-thinking, hotsie-totsie Anne Francis runs around in (almost 15 years before they were acceptable fashion—talk about prescient). Or perhaps it’s the pitch-perfect performances from vets like Walter Pidgeon, Leslie Nielsen, Warren Stevens and Earl Holliman (they know it’s a goofy sci-fi movie, but they play it straight as straight can be—possibly because it’s based on Shakespeare’s The Tempest). It could well be the impressive special effects and spacey electronic score, which were light years ahead of their time. But my bet is that it’s all of the above, plus the tin-can comic relief of the classic Robby the Robot. Whether he’s dropping snarky one-liners or distilling whiskey for the frustrated crew of bad-boy astronauts, Robby can always be counted on to steal any scene he’s in. 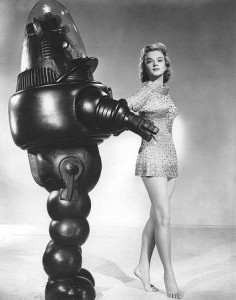 In the 23rd century, a spaceship is sent to the planet Altair IV to get to the bottom of a missing colony of explorers. As they near the planet, a Dr. Morbius (Walter Pidgeon) warns them to turn around and return to Earth. It seems he and his daughter, Altaira (Anne Francis), are the only survivors of the assault that wiped out the colony. The enemy was a mysterious force of some sort, and Morbius is hoping to use the technology of the Krell (the race of beings that previously inhabited the planet) to prepare himself for any future attacks. The Krell’s technology has boosted Morbius’ intellect astronomically, allowing him to invent all kinds of cool gizmos, such as Robby the scene-stealing Robot. Pseudo-scientific gibberish is spouted and freaky things happen (rayguns!), then the whole thing ends in a thrilling climax that Freud would be proud of. (See what I did there?)

Full of lush colors and stunning sets, this flick still looks fantastic. I imagine legendary cinematographer George J. Folsey had something to do with that. While the film is set in the future, the social mores are definitely stuck in the ’50s, with a healthy dose of Puritanism and a little light misogyny on display. But that’s part of its charm, I suppose. 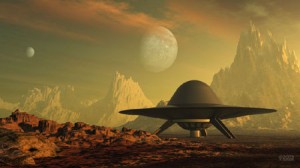 To wrap it up: If you have seen it, you know what I mean. If you haven’t seen it, why not? It’s an awesome flick that holds up very well in these days of Avatar bombast. The influential Forbidden Planet has been cited as an inspiration by people such as Gene Roddenberry and J.G. Ballard—so, of course, it’s being considered for a remake or reimagining or whatever they call it these days. Do yourself a favor. See the original Forbidden Planet as soon as you can, so you can sit back and have a hearty self-satisfied laugh at the new version…because, hey, some things never go out of style.