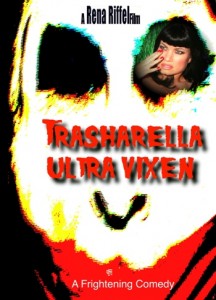 Actress Rena Riffel has covered a lot of terrain in the movie biz. From low-budget horror movies to “bound heat” exploitation flicks, she’s certainly traveled the fringes. She’s also flirted with the big-time, doing great work with directors Paul Verhoeven and David Lynch while starring alongside Gina Gershon and Naomi Watts. So it makes sense that when time came to create her own film, she would make a movie that mixes together everything she’s ever done. Let me see if I can get this right—Trasharella Ultra Vixen is a surreal satirical super hero musical horror fairytale that writes an alternate history of Hollywood. But wait, it’s also an unabashedly campy cult trash movie that makes no apologies for itself. I’d say that’s a pretty ambitious project for a director’s first feature. And while Trasharella Ultra Vixen doesn’t succeed as well as it might have, it’s unquestionably better than it was.

Yes, you read correctly. I said “was.” Trasharella Ultra Vixen has a past, almost worthy of a film of its own. See, before it was Trasharella Ultra Vixen, it was just Trasharella. When Riffel made Trasharella in 2009, it was 20 minutes longer and, frankly, a total mess—a rambling, confused jumble of images and symbols, with flashes of clever wit and the occasional moment of odd beauty. I could tell Riffel had a specific vision—there was thought behind it and a method to her madness—but damned if I could figure out exactly what it was. 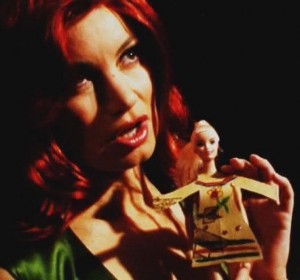 Act I: Trasharella tells the story of Helena Beestrom (Rena Riffel), a beautiful, untalented actress who comes to Hollywood to become a star. In her pursuit of fame, she falls victim to the Hollywood Vampire, an entity that looks like Grandpa Munster wearing a fez and has been around for decades, feeding on the life force of eager young starlets. For the sake of all hopeful girls with stardust in their eyes, it’s up to Helena to defeat this flamboyant creature, who speaks with an exaggerated Yiddish accent (and also plays the accordion, which proves he’s evil). So, Helena transforms herself into the super hero Trasharella and slays him in a humorous scene of bloody Barbies. Along this metaphorical journey, we get musical interludes and beautifully realized flashes of her past life. It was all shot on the cheap and purposely tailored to look like a trash film. In that, it thrives.

Act II: Riffel recently decided she could improve her movie and took it back to the editing suite. There, she performed major surgery and emerged with a new cut, dubbed Trasharella Ultra Vixen. And I have to say, it’s now a better film—one that’s exceedingly easy to follow: you know, a “real” movie. But for me, that’s the problem with the new cut. This version is almost too simplified. Riffel has not only shifted scenes around, she’s also added subtitles and notes onscreen to clarify her film. While it is helpful to the viewer, Trasharella ends up feeling somewhat sanitized and neutered. Remember, like jokes, metaphors and symbols lose their power when explained. In my conversations with Riffel, she explained it as “Trasharella for dummies,” and that’s a perfect description. At least when it was a mess, it was a cool mess. Now it’s just safe. And those moments of odd beauty don’t seem quite as beautiful as they did before. 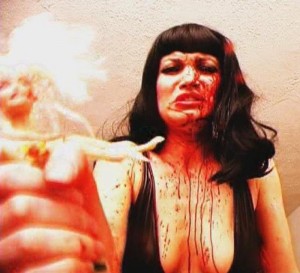 Admittedly, it’s hard for me to review Trasharella Ultra Vixen on its own terms, because I can’t unsee the first cut of the film. As hard as I tried, I couldn’t stop comparing it to the original version. One thing that hasn’t changed is Riffel’s portrayal of Helena Beestrom/Trasharella. Riffel is a talented performer and she’s very good as the very bad Helena. It’s harder than you’d think for a talented actor to act badly, and Riffel is wonderful campy fun as the terrible young starlet. Another thing that Trasharella Ultra Vixen proves about Riffel is that she has skills behind the camera. The flick still looks trashy, but it’s a much tighter movie. Riffel can definitely edit and shoot. She just needs to get a handle on storytelling and translating her overall vision to film. I mean, when you set out to make a “bad” movie, it’s hard to complain when you end up with one. She has good ideas and gives us some stylish shots and sequences, but the narrative still feels lacking—even now that we’re sure exactly what it is.

When she’s in front of the camera, Riffel is often the best thing about the flicks she’s in. Hopefully, we’ll be able to say that soon about her ability behind the camera. She already has a good visual sense and interesting ideas. Add some experience and discipline to that combination and you have a description of a talented filmmaker. Riffel already has another project lined up, so that takes care of “experience.” Now, we wait for Act III.