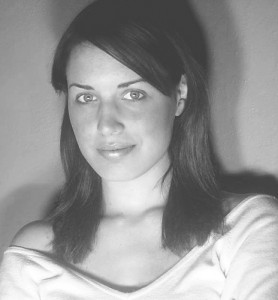 We’re back with another piece in our series on Trash Film Orgy’s upcoming flick, Planet of the Vampire Women. Today, the focus is on a glamorous young actress and comedian named Stephanie Hyden. Stephanie has been involved with TFO, on both stage and screen, over the last few years, but she’s had showbiz dreams since childhood. She has been a bit of chameleon in her work with TFO, so I was eager to find out about the real Stephanie. Recently, I got the chance to talk with this multitalented performer about life, love and shooting at space bats.

Hi Stephanie, thanks for taking the time for this quick chat. Can we get a little background info about you. Where are you from?

I was born and raised in Sacramento, but I moved a lot. 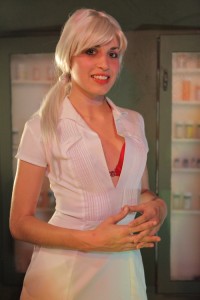 And have you always been a performer?

I started writing plays and puppet shows when I was 7; it was an easy way to make friends. I would cast the neighborhood kids and we would put on a show for our parents. My mom would make popcorn and she would make it a really fun event. I have her to thank for being a performer.

I look forward to every day we film, everyone gets along really well and we have a lot of laughs. It’s going great! Last week I got to shoot at space bats. 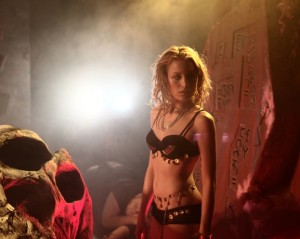 Cool! Gotta love that. What can you tell me about your character?

I play Astrid Covair, a sexy, bubbly pleasure clone who’s tired of her job. I love playing her because she has a halo-suit that allows her to change her appearance on a whim.

Wow—by my reckoning you’ve portrayed a zombie cheerleader, an intrepid reporter and, now, a sexy pleasure clone? TFO really allows you to play a range of weirdness, eh? 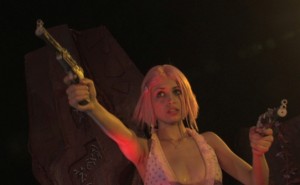 I hear you’re involved in the world of improv comedy, disproving the cliché that beautiful women aren’t funny. Tell us a little about the very funny ICUP.

I started ICUP Comedy Troupe with my fellow Planet of the Vampire Women co-stars Jawara Duncan and Josh Dietz two years ago. We perform an hour-long original show every month at the Capitol City Hotel and several improv shows in Sacramento. We combine improvisational games and with our sketches, so it’s like Saturday Night Live mixed with Whose Line is it Anyway?

Sounds like fun! Tell me, what do you enjoy more: TFO’s stage productions or acting in front of a camera? It seems like the stage productions would allow you to flex a different set of muscles, more like improv.

It’s hard to choose between the two because I love them both, but with TFO I lean more towards film because I get to sit down, relax and enjoy the experience. When I’m in front of an audience, I have a feeling of complete awareness and I’m ready for anything, but with film I’m calmer and think my characters are more authentic. It’s definitely a different set of muscles and a different mindset.

It’s good to be versatile. So, what’s next for you, Stephanie?

I’m going to continue to study improv and audition for more films.