In honor of Women in Horror Recognition Month, allow me to present the first in a series of pieces honoring, well, women in horror.

I want to kick off by focusing on an actress that meant a lot to me as a kid—a woman who, sadly, doesn’t get much attention these days: Madame Maria Ouspenskaya. Though she’ll always be best known as Maleva, the old Gypsy fortuneteller in the great 1941 Universal horror film The Wolf Man, Ouspenskaya was an amazingly versatile actress who led a fascinating life and, though it’s generally not acknowledged, played a major role in the development of acting in America. 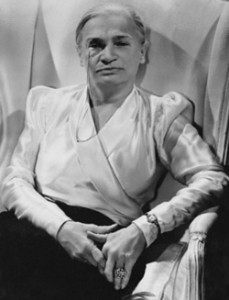 Maria Ouspenskaya (Russian: Мария Успенская) was born on July 29, 1876 (sometimes reported as 1887), in Tula, Russia. She first trained as an opera singer and studied voice at the Warsaw Conservatory before fortuitously switching to Adasheff’s School of Drama in Moscow for dramatic training. After graduation, she paid her dues by touring the hinterlands of Russia as part of a theater troupe. During 1917, in the midst of the Russian Revolution, Ouspenskaya joined the Moscow Art Theatre, where she trained and taught under the legendary Konstantin Stanislavski, founder of the famous “Stanislavski Method.” It was during this period that she began her film career, appearing in several Russian silent movies. 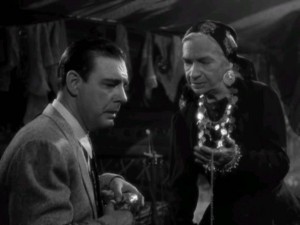 In what can only be described as a lucky break for the world and acting as a whole, in 1923 the Moscow Art Theatre toured Europe and the United States. But when the troupe returned to Russia, Ouspenskaya stayed in New York and started teaching the Method at the American Laboratory Theatre. Her students included Stella Adler and Lee Strasberg, both of whom went on to great acclaim, teaching the Method to actors such as James Dean, Montgomery Clift and Marlon Brando. I shudder to think what would’ve happened if Ouspenskaya hadn’t brought Stanislavski’s method to America. As if she wasn’t busy enough, Ouspenskaya also forged a career on Broadway before opening her own acting school, the Maria Ouspenskaya School of Dramatic Arts. 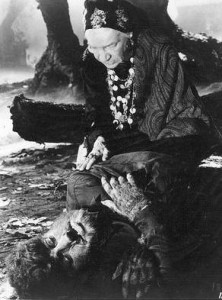 While on Broadway, in 1936, Ouspenskaya appeared in the stage adaptation of Dodsworth, a novel by Sinclair Lewis published in 1929. When Hollywood decided to make a film version, she was chosen to reprise her role onscreen. And for this, she was nominated for an Academy Award for Best Supporting Actress—quite an achievement for her first American film. Over the course of her career, Ouspenskaya appeared in 19 more films and garnered another Oscar nomination.

Though Ouspenskaya was considered a difficult actress to work with, she was much in demand and highly respected for the range of her talent. As evidence of this, she was tapped to portray several nationalities and was skilled enough to play everything from a sweet old lady to a tyrannical ballet teacher. But in 1941, she took the role that forever made her the answer to the trivia question “Who played the Gypsy woman in The Wolf Man?” 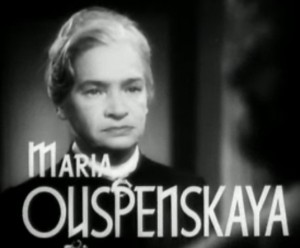 As Maleva, Ouspenskaya’s main purpose is to act mysterious and deliver ominous expository dialogue to let the audience—and Lon Chaney Jr.’s Lawrence Talbot—know what’s going to happen. This she does wonderfully, but she does oh so much more. As the mother of the doomed Bela (played by Bela Lugosi), she’s oddly touching as a loving parent who has somehow accepted the fact that her son is damned. Ouspenskaya treated the character of Maleva as seriously as any other she’d played. From her performance, you’d never know Ouspenskaya was acting in a monster movie. As a child, next to the incredible makeup of Jack P. Pierce, it was Ouspenskaya that I loved most about this flick. Her line delivery is pitch perfect. In my mind, I can still hear her saying: “Whoever is bitten by a werewolf and lives becomes a werewolf himself.” Or, “Go now, and heaven help you!” Embarrassing admission time: I used to run around, a towel draped over my shoulders, imitating her delivery of those classic lines, butchering her accent in Make-Believe Land.

Madame Ouspenskaya played Maleva once more in 1943’s underrated Frankenstein Meets the Wolf Man, in which Bela Lugosi also appeared, this time playing Frankenstein’s monster. After this, she went on to play an Amazon queen in Tarzan and the Amazons and even appeared in a Western called Wyoming. Ouspenskaya died on December 3, 1949, from a stroke, a few days after she suffered massive burns as a result of falling asleep while smoking. While Madame Ouspenskaya will always be remembered as a simple Gypsy woman, everyone should know that she was, first and foremost, an artist.