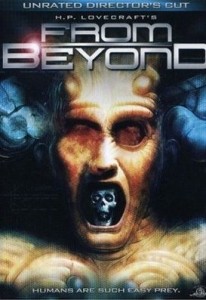 The mid-eighties were a golden period for director Stuart Gordon. Having begun his career in Chicago’s avant-garde theater scene in the late sixties, working with heavyweight people such as David Mamet, Dennis Franz and Joe Mantegna, Gordon eventually made his way to Hollywood. In 1985, in what seemed a strange choice, he made the wonderful horror movie Re-Animator. In 1986, he followed that up with another film, From Beyond.

Based on a short story by H. P. Lovecraft, From Beyond is the tale of Dr. Edward Pretorious (Ted Sorel) and his colleague, Dr. Crawford Tillinghast (Jeffrey Combs). It seems Dr. Pretorius has been doing research into the pineal gland, which he believes acts as a dormant sixth sense. Along with Dr. Tillinghast, Pretorious has designed and built a machine, a sonic resonator, that stimulates the pineal gland, allowing humans to feel and see a parallel universe that surrounds us at all times. This parallel universe is inhabited with dangerous, otherworldly creatures that aren’t aware of us unless the resonator in use. It is also apparently ruled by an evil intelligence that wants to destroy humanity. And why not? 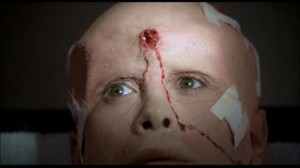 The film opens with Pretorious and Tillinghast experimenting with the resonator for the first time. This session ends in the death of Dr. Pretorious, seemingly at the hands of Dr. Tillinghast. Tillinghast is arrested and locked away, babbling about how a creature from beyond ate Pretorious (“bit off his head…like a gingerbread man”). Of course, the resident evil psychiatrist, Dr. Bloch (Carolyn Purdy-Gordon), immediately labels him a lunatic and recommends he be institutionalized. But the foxy Dr. Katherine McMichaels (Barbara Crampton) isn’t so sure. She listens to his story and, intrigued, decides the only way to know what really happened is to recreate the experiment with the resonator. Since the police can’t tell what occurred—they found Dr. Pretorious’ body, but with no head and no blood—they agree to let Dr. McMichaels try to figure it out. So, they release Dr. Tillinghast into Dr. McMichaels’ custody and accompanied by a police escort, Sgt. Bubba Brownlee (Ken Foree), they head back to the Pretorious house to set themselves up for all kinds of preternatural trouble. As one creature remarks, “Humans are such easy prey.”

Out of print for years, From Beyond has finally been released on DVD by MGM in a new unrated director’s cut that restores previously excised footage that has never before been seen. Upon its initial release, several seconds of gore had to be trimmed so the movie could get an R rating. This footage was believed to be lost. But, luckily for us spatterhounds, it was recently found and digitally refurbished—and it looks magnificent.

This is an incredibly fun film that has a little something for any B-movie fan. Wonderful performances—check. Kinky sex—check. Great effects—check. Brain eating—check. Thankfully, Stuart Gordon filled the cast of From Beyond with several of the superb actors from Re-Animator. Jeffrey Combs again shows himself to be an acting treasure. In the shattered Dr. Crawford Tillinghast, he created a character that is quirky, intelligent, funny, forceful and poignant. And as always, his line readings are priceless (“That will be quite enough of that!”). Barbara Crampton, as the “girl wonder” psychiatrist, is quite subtle as Dr. McMichaels and once more proves herself to be one of the gamest actresses working. With her role as Dr. Bloch, Carolyn Purdy-Gordon, following her appearance in Re-Animator, seems to be trying to corner the market on unpleasant doctors. But in certain scenes, she allows us to see the humanity behind her character’s petty cruelty. Sadly, Ken Foree (Dawn of the Dead, The Devil’s Rejects) doesn’t do much here, but he’s a lot of fun to watch while he’s doing it. 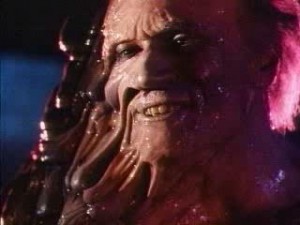 Stuart Gordon has made several films based on H. P. Lovecraft tales, with Re-Animator perhaps being the best known. Making a film based on a Lovecraft story is a deceptively difficult thing to do because most of them are quite short. But Gordon has shown over and over again that he can fashion an effective feature-length film in the spirit of Lovecraft’s somewhat quaint original source material. That he was able to do so again here, while also comfortably introducing sexual depravity, copious gore and big rubber monsters, proves that Stuart Gordon is a modern horror movie god…perhaps one From Beyond.

This article was posted in Reviews and tagged B movie, Barbara Crampton, eighties, From Beyond, gore, H. P. Lovecraft, horror, Jeffrey Combs, Ken Foree, Re-Animator, Reviews, Slammed & Damned, Stuart Gordon, Theron Neel. Bookmark the permalink. Follow comments with the RSS feed for this post.Trackbacks are closed, but you can Post a Comment.