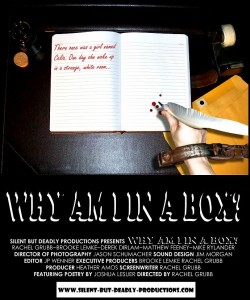 One of the most mistaken assumptions is that artists have it easy. Sure, it sounds awesome. You get to sit around in your pajamas all day, chasing your muse and watching or reading whatever catches your attention, all in the name of “research.” But then you have to actually do the work. You have to create. You have to deliver the goods. You have to make something out of nothing. And therein lies the rub. Take it from me—inspiration isn’t always enough. Sometimes, you need a little something extra to motivate you. Writer/director/actress Rachel Grubb obviously knows this. Her new film, Why Am I in a Box?, is a look at artists who need, shall we say, extreme motivation. And they get it. Boy, do they get it.

Ellen Farnsby (Rachel Grubb) is a writer. Well, she wants to be a writer. Her boyfriend, Ted (Mike Rylander), is a writer too. Well, he wants to be a writer too. Jeremy (Derek Dirlam), who has a crush on Ellen, is a filmmaker. Well, he wants to be a filmmaker. All that’s keeping these artists from creating a masterpiece is themselves. That’s where Paige (Brooke Lemke) comes in. Paige wants to be a writer, but she knows her limits. Rather than torture herself with delusions of grandeur, she’d much rather torture someone else. So, one day she kidnaps Ellen and locks her away in a room, demanding Ellen write a novel. Think of Paige as the ultimate patron. She’s willing to provide Ellen with everything she needs to create—especially inspiration. See, if Paige doesn’t like what Ellen writes, Ellen will die. And as proof of her commitment, Paige presents the severed finger of a former protégé. How’s that for inspiration? It’s certainly enough for Ellen, who begins writing for her life, while the men in her life begin trying to save her life…that is, when they’re not trying to create their own works of art—because, really, what’s more important: life or art? 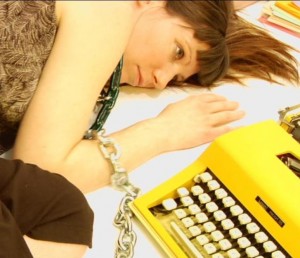 Grubb has given us a movie that, severed limbs aside, bears more relation to the mumblecore films of Andrew Bujalski than to standard-issue fright flicks—call it “mumblehorror” if you will. This quirky black comedy rambles along at its own pace, finding its rhythm as it goes. But that’s all part of its charm. Another part of its charm is the performances of its cast. While some of the players are a bit uneven, all of the principals are very good. For me, the standout is Derek Dirlam. As Jeremy, he demonstrates the charisma and chops necessary to easily carry a big-budget, mainstream project. Speaking of budget, Grubb has delivered a flick that, quality-wise, is head and shoulders above other low-budget indie horror films. Why Am I in a Box? looks and, more surprisingly, sounds wonderful. That’s quite an achievement for a first-time director working with limited funds.

Ms. Grubb began her career with plans to become a novelist. Along the way, she got sidetracked. With Why Am I in a Box?, she’s been able to cleverly exorcise those authorial demons. Hopefully, she has a little left over in her toolbox for her next flick. Maybe something about a slacker actress that gets some much-needed motivation from an overzealous director? Ooh, that’s good. I think I’ll write my own screenplay—right after I finish watching this Project Runway marathon.

This article was posted in Reviews and tagged Andrew Bujalski, Brooke Lemke, Derek Dirlam, horror, Mike Rylander, mumblecore, mumblehorror, Rachel Grubb, Reviews, Slammed & Damned, Theron Neel, Why Am I in a Box. Bookmark the permalink. Follow comments with the RSS feed for this post.Trackbacks are closed, but you can Post a Comment.