Baba Yaga (aka Kiss Me Kill Me) 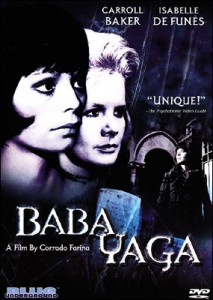 Well, we made it. It’s the last stop on Slammed & Damned’s whirlwind European tour. We’ve seen four Euro horror films in four days. And while we haven’t seen all that much of Europe, we have seen four very different styles of Euro horror. First, it was Devil’s Nightmare, a slightly sleazy Belgian/Italian film. Then we saw Pieces, a wonderfully awful Spanish slasher flick. Next, it was back to Italy for Mario Bava’s atmospheric marvel Kill, Baby…Kill! And now we arrive at our final selection, a 1973 Italian/French production called Baba Yaga (aka Kiss Me Kill Me).

As you’ll remember, originally I was going to review Kiss Me Kill Me, before I realized it was the same flick as Baba Yaga. Because my copy of Kiss Me Kill Me is an inferior-quality disc, I decided to treat myself and review my nice, remastered DVD of Baba Yaga instead. I hope that’s okay with everyone. Although Kiss Me Kill Me and Baba Yaga are essentially the same film, there might be minor differences between them. I apologize if you were looking forward to a review of Kiss Me Kill Me specifically. 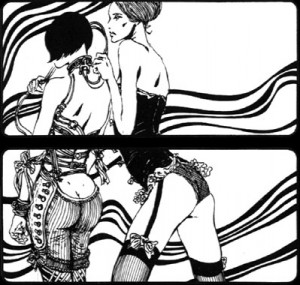 Baba Yaga is the story of Valentina Rosselli (Isabelle De Funès), a popular photographer known for her edgy, politically influenced glamour shots. One day, Valentina catches the eye of Baba Yaga (Carroll Baker), a beautiful older woman who just might be a witch. With the help of her friend Arno (George Eastman), Valentina does her best to resist Baba Yaga’s efforts at seduction and domination. And while this plot unfolds, we get a good look at ‘70s fashion in all its tacky glory. The proceedings are filled with deliciously decadent glam-rock clothes and furnishings, as well as a large dose of the nudity and fetishism favored by Crepax. 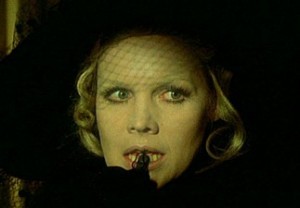 Director Corrado Farina set out to interpret Crepax’s work into the medium of film and he did a good job—maybe too good of a job. What works on the comic page doesn’t necessarily work on the screen. Crepax’s stories and images are surreal dreamscapes that are highly impressionistic and often lack a strong plot line. In his work, it’s not the tale that’s important; what matters is how it’s told. Farina employed the same philosophy in making Baba Yaga, but the demands of commercial film (and his producers) required a somewhat straightforward narrative be imposed. So, Farina wrapped his basic tale in bizarre imagery and visual non sequiturs that are faithful to Crepax but don’t have much relation to traditional film grammar and syntax. The end result is a bit of a mess. But it’s a Euro-fabulous mess that can be a lot of fun if you approach it on its own terms. Also, don’t expect much horror in this horror movie. It’s not scary, just stylish. But that’s enough for me. I choose to view it as a time capsule—one that includes a groovy score as well as a leather-clad killer sex doll. (See what I did? If you were on the fence, I know you want to see it now.) Check out the NSFW trailer below for a taste of Baba Yaga‘s sado-delights.

Wow, is that it? I can hardly believe we’re done with Euro Horror Week and our look at the Blood Bath DVD four-pack. It’s been a hectic, yet fun-filled few days. Travel should be educational, and I have to say that I did learn something from our trek. While I’ve always thought of Euro horror as a fairly limited genre, I think we’ve seen that it’s not. It contains, to borrow a phrase from ska-punk band Sublime, “everything under the sun.” And if you ask me, to borrow a phrase from ‘80s British band Fine Young Cannibals, that’s a “good thing.” One more thing, I hope my use of all these song titles to close my reviews this week didn’t, to borrow a phrase from Canadian band The Odds, “make you mad.” (Personally, it’s kinda getting on my nerves.)