Here we are on day three of Slammed & Damned’s Euro Horror Week, during which we’re taking a look at the flicks in a DVD four-pack called Blood Bath. If you remember, we began in Italy 1971 and then shot over to Spain 1982. Now we’re back in Italy again. Even though we seem to be spending a lot of time in la bella Italia, you have to admit this tour is giving us a nice look at a pretty wide range of Euro horror. Today, we’re going to visit the brilliant Mario Bava’s 1966 film Kill, Baby…Kill! (aka Operazione paura), which is about as far from Pieces as you can get.

We open in Germany 1907. A string of mysterious deaths has occurred in a small village. Though it’s a new era, the villagers are still mired in the lore and superstition of centuries past. While the deaths all seem to be accidents, it is commonly believed that the real cause is a local curse. Hoping to get to the bottom of these tragedies, Inspector Kruger has summoned a coroner, Dr. Paul Eswai (Giacomo Rossi-Stuart), to examine the corpse of the most recent victim. Aiding him will be the beautiful Monica (Erika Blanc), who has recently returned to the village from school. Together, they discover a silver coin embedded in the heart of the dead girl and are soon drawn into a mystery with ramifications neither are prepared to believe possible. It seems the spirit of young Melissa Graps, who died 20 years earlier, is back to take vengeance on the people of her village. But can this be true? What role does Ruth, the local sorceress, play? And what of the mysterious Baroness Graps, who lives alone in her crumbling villa? Is she mad, evil…or both? 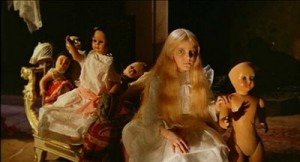 Kill, Baby…Kill! is a wonderful film and an excellent example of what’s great about Mario Bava as a filmmaker. It’s interesting to step back and view this film in context of the times in which it was made. In the mid-sixties, Britain’s Hammer Studios was making solid, Gothic horror flicks, while in America, Roger Corman was doing the same through American International Pictures. Over in Italy, Bava was making similar films, but he brought a level artistic skill that far surpassed that of his peers. Kill, Baby…Kill! is full of what we love about Bava: artful compositions, expert utilization of shadow and light, an active camera, surprising use of color. Watching this movie today, it’s easy to see the line connecting Bava and Dario Argento, who seems to have picked up where Bava left off—maybe more so than Bava’s son, Lamberto, who acts here as his father’s assistant director.

If you want an understated piece of atmospheric horror filmmaking with subtle hallucinogenic visual touches, seek out Kill, Baby…Kill! It might not be as well known as Black Sunday or Black Sabbath, but it’s definitely as good a film—in fact, in some ways it might even be better.

All right, people, we’re almost done with our whirlwind tour of Europe, and I must admit I’m beginning to flag a bit. One more flick to go. Check in tomorrow to see if I can do it, to borrow a phrase from Daft Punk, “one more time.”