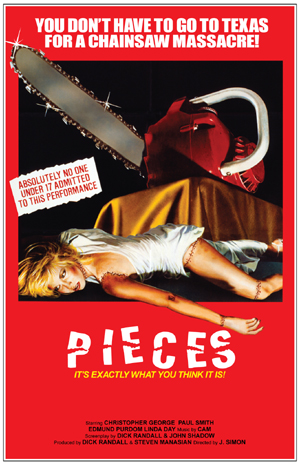 Welcome to the second stop on Slammed & Damned’s European tour. Yesterday, Euro Horror Week began in Italy, with an exciting visit to Devil’s Nightmare. Today, we hop over to Spain for a 1982 slasher-fest called Pieces (aka Mil gritos tiene la noche), a somewhat notorious film in certain circles. No less an authority than director Eli Roth has called this flick “a masterpiece of early ‘80s sleaze.” And he’s right. But that’s not all it is.

Pieces was written by the infamous trash-meister Joe D’Amato, but it doesn’t appear to have been written at all. The story is all over the place here. This is one of those films where you’re constantly asking, “Didn’t he just…?” or “Why did they…?” At times, it seems director Juan Piquer Simón cut the flick up into pieces and assembled it while blindfolded and then dubbed in explanatory dialogue to fix any narrative problems. And somehow, it all works.

We open in Boston 1942. A boy, about 10 years old, is putting together a nudie puzzle when his mom walks in and freaks out. And I mean Freaks. Out. She starts screaming angrily and trashing the room, and then she demands that he go fetch her a plastic bag to clean up with. He goes, but he doesn’t bring back a plastic bag (which weren’t even invented until 1950). He returns with an axe, and then he freaks out. And I mean FREAKS. OUT. He whacks her with the axe and then sits down to gleefully dismember her with a saw. Unlike his mom, he hasn’t lost his head—when the police show up, he hides in a closet and plays innocent. 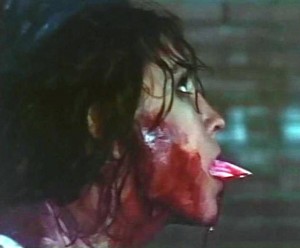 Cut (ahem) to 40 years later. There’s a maniac running loose on a Boston university campus, cutting up coeds with a chainsaw and taking pieces of the bodies. We know the killer is the little boy because we see him reassembling the now bloody puzzle from the opening scene. But who is he? Is he a student? Is he the groundskeeper? Is he a professor or maybe the dean? Soon, the police are called in. Apparently, the Boston police department only has two detectives, and they might well be the most incompetent detectives in movie history. But they mean well and everyone respects them. Eventually, the case is solved, but not before the murderer has bloodily chopped up several coeds and collected enough body parts to assemble a human nudie puzzle. The end? 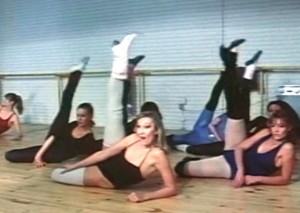 I love this movie so much, but where to begin? Let’s break it down. First, the score of this flick is fantastic. It’s like a character all its own. One minute, it’s moody Goblin-like electro sound effects; the next minute, it’s cheesy ‘70s porn music. But it’s always perfect. Awesome! Next, this killer isn’t your usual maniac. He seems to also be the invisible man. This guy strolls around campus in broad daylight wearing a trench coat, a suspicious black fedora pulled low, clumsily hiding his chainsaw behind his back—and no one notices. Awesome! Next, because the police force is so understaffed, the lead detective (‘70s hunk Christopher George) calls in an amateur to work undercover. But not just any amateur. He calls in former world-famous tennis pro Mary Riggs (‘70s fox Linda Day George), who happens to have retired to a desk job in the police station. Awesome! 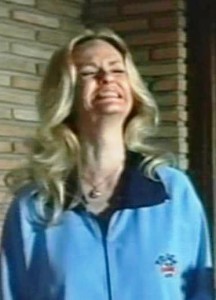 Speaking of Linda Day George, she has maybe the best scene in the movie. After finding the bloody corpse of a young girl, she’s so upset that she stands waving her clenched fists and looking at the sky, screaming “Bastard! Bastard! (beat) BASTARD!!!” It’s so deliciously awful, I had to stop and watch it twice. Awesome! Add to that the aforementioned aerobic dancewear that seems to appear every few minutes, as well as a kung fu attack that comes out of nowhere for no reason other than to have a kung fu attack in the movie, and you just have one of the best worst flicks ever committed to film. But it’s not all bad. If Pieces gets anything right, it’s the kills. There are several bloody, stylish murders here. So, if you’re watching and scratching your head at some incongruous plot point, just wait a few minutes. You’ll be rewarded with a slo-mo stabbing on a water bed or something cool like that.

Oops, I forgot to mention the ending, which totally violates the rules of storytelling. The reveal of the killer is utterly underplayed. It’s mentioned almost as an afterthought. Of course, by then we’ve figured it out. It’s pretty clear who the murderer is within the first 20 minutes. Still, they could’ve tried to make it the big deal it’s supposed to be. Also, there’s a point at which the flick really should’ve ended—a pretty good jump scare. It was the perfect place to stop…but they kept on going…and tacked on another jump scare that’s just plain confusing and totally cuts the tension of the first one, sending the film off in a completely different direction right before it stops. But somehow, and I’m not sure how, it’s the perfect ending for this film.

All right, there you have the second entry in Euro Horror Week. There are two more films to watch and review over the next three days and, so far, I’m doing pretty well. I think I can make it, coach. Oh, one thing before I close. Yesterday, I jokingly asked you to “place your bets” on my ability to complete the challenge I’ve set for myself. I want to stress that this is an exhibition, not a competition. So, please, no wagering. Personally, I remain cautiously optimistic. Stop by tomorrow as we resume our tour and I, to borrow a phrase from The Wiz, “ease on down the road.”