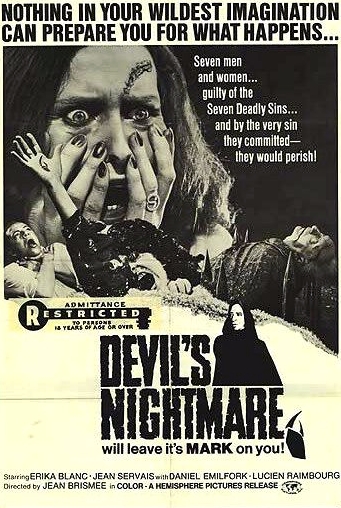 We kick off Euro Horror Week with a 1971 Belgian/Italian flick for which details are fuzzy and information is hard to come by, even though it seems to be somewhat popular. As so often happens with low-budget foreign horror movies from the 1970s, this movie has a plethora of titles. On the DVD box, it’s called Devil’s Nightmare, though I find it listed other places as The Devil’s Nightmare (a small difference to be sure, but just the kind to make me crazy). The title in the credits of the movie is La Terrificante Notte Del Demonio, but on IMDb it comes up as La plus longue nuit du diable. In all, I’ve found a whopping 14 different titles for this flick. So, call it what you like. You know what they say: A rose by any other name—but is Devil’s Nightmare a rose? I suppose it might be, if you consider the fact that it has a few thorns.

We open in sepia-toned Berlin 1945. One particular Nazi, Baron von Rhoneberg (a nice Teutonic name), has stepped away from the war to be at the birth of his child. Sadly, his wife dies in childbirth (much like the Nazi agenda, not sadly), but he’s presented with an adorable baby girl, who he immediately stabs with his bayonet. This is probably the most disturbing scene in the whole flick, and the fact that it occurs five minutes in is one of the thorns I alluded to. Remember, this is foreign horror from 30 years ago. It moves very slowly, even for me—a guy raised during the ‘70s. I love flicks like this, but this was the longest 95 minutes I’ve spent watching a movie in quite a while. But I digress.

Cut to Berlin 1971. Baron von Rhoneberg has locked himself away in his family castle. A nosy reporter has tracked him down and is hounding him for an interview. You’d think she wants to know how a high-ranking Nazi officer escaped prosecution, but you’d be wrong. She’s after the hard-hitting story of the von Rhoneberg family curse. It seems that a pact has been made with Satan. It seems each generation’s first-born girl will become a succubus (which explains why the Baron killed his daughter). And it seems to be common knowledge, so I don’t know why the reporter had so much trouble getting the story. Even all the villagers know. But villagers always seem to know everything, don’t they? When the reporter is found dead (of course), the villagers gather round the body and agree that it must’ve been the succubus. Ah, the age before the internet. Can you imagine if this happened today? It’d be all over The Drudge Report in seconds. But I digress. 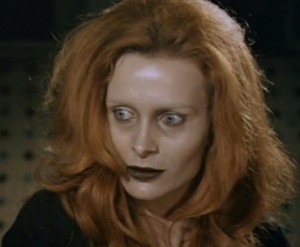 Meanwhile, a tour bus full of seven sightseers (the usual varied group of clichéd characters from European Central Casting) is tooling around the German forest, seeing the sites (which seem to be, umm, trees). The tour bus hits a roadblock, but the driver is advised by an über-creepy farmer to head to—say it with me—the Baron’s castle, which he does (of course). After they arrive, it soon becomes über-clear that the seven people on the bus represent the seven deadly sins, though some of them are sketched more broadly than others. It was über-easy to identify lust, gluttony, greed and pride. But all the others just seemed to be über-whiny, which isn’t a deadly sin though it probably should be. But I über-digress.

Later that night, the mysterious Lita shows up, a beautiful flame-haired Euro-babe. While she is initially turned away by the housekeeper, she eventually gains entry. And this is when things start to go über-bad. (I swear that’s my last “über” gag.) To make a slow story fast, Lita is a succubus and she begins to knock off people in ways related to the seven deadly sins. I say “begins” because the whole theme peters out after the first couple of kills. Eventually, a fairly effective twist ending is tacked on to finish things up. The end.

Devil’s Nightmare starts strong, but slows as it goes. It has plenty of what makes ‘70s Euro horror great: atmosphere and hot chicks in skimpy clothes. Though the production values in this flick are low, the costumes and makeup are seventies-tastic. Because the movie has been dubbed in to English, the performances are hard to judge. And, boy, has this flick been dubbed—at times, I felt as if I was watching Godzilla by way of an episode of Speed Racer. There isn’t much gore at all, but when there is, the filmmakers use that classic bright-red fake blood that looks like paint (which I love, but your mileage may vary). Another Euro-horror trope Devil’s Nightmare has is the almost-mandatory lesbian sex scene. So, you can relax. It’s here, though admittedly somewhat modest. It’s as if director Jean Brismée knows he has to include one, but doesn’t want it to be gratuitous, which is funny if you think about it. 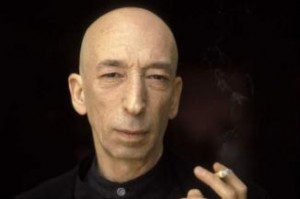 The only actors I’ll mention by name are Erika Blanc, who plays the succubus, and Daniel Emilfork, who plays Satan. Blanc is an Italian actress known for her work in horror flicks of the period. She’s quite good as Lita, prowling around in revealing clothes and tempting people to their doom. Her makeup in Devil’s Nightmare is an interesting choice. She’s gorgeous as she tempts people, but when they die she looks like, well, a green current-day Faye Dunaway. Emilfork is one of those actors you know you’ve seen somewhere. I finally realized I knew him from the cool French film The City of Lost Children. Here, all he has to do is sit around looking mysterious, and he nails it.

So there you go. The first entry in Euro Horror Week has been watched and reviewed, people. Can I keep up this grueling pace? Place your bets. Sure, four movies over five days sounds easy enough. But, to borrow a phrase from ’80s prog rock band Asia, “only time will tell.”