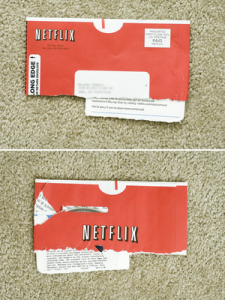 Here’s a recent news item that doesn’t apply exclusively to horror fans, but we are definitely affected. I don’t know if you heard, but a few weeks ago Netflix made a somewhat controversial deal with Warner Brothers. Netflix has agreed to not ship new Warner Brothers DVDs for 28 days after their release date. For this, Netflix will get better prices on Warner Brothers product and, more important, access to hundreds of more films for its “Watch Instantly” option.

This is a great deal for both Netflix and Warner Brothers. Netflix lowers its costs and obtains more product for its streaming service. (Let’s face it, video on demand is the future of movie rentals.) And Warner Brothers gets the chance to sell more product without the worry of Netflix rentals hurting sales. (Most DVDs are sold within a month of release.) Of course, if you’re a Netflix subscriber who mostly rents new releases (and a large percentage of Netflix subscribers are just that), it’s a bad deal—not only because you’ll have to wait for new WB flicks, but because other movie studios are sure to follow WB’s lead and strike similar deals.

In the scheme of things, I suppose it’s not so awful. There are plenty of movies out there to tide us over for the 28 days we’ll wait for a new WB flick. I tend to worry more about the fact that streaming video is the future. This is too much change for a man of my advanced years. I’ve only recently gotten used to CDs and DVDS. And I hate to watch movies on my computer. Yes, I know I can stream to my television set, but that involves connecting new boxes to my already-overcomplicated setup. Or I could plug my computer into my TV—but, c’mon, I do well just to get my shoes tied each day. I know, I know. I must embrace the future and keep repeating “change is good, change is good, change is good.” But, oh, the horror!

This article was posted in Other Awesome Stuff and tagged CDs, DVDs, horror, Netflix, Other Awesome Stuff, Slammed & Damned, streaming, Theron Neel, video on demand, Warner Brothers. Bookmark the permalink. Follow comments with the RSS feed for this post.Trackbacks are closed, but you can Post a Comment.