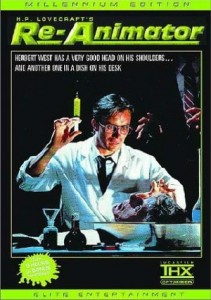 Re-Animator, director Stuart Gordon’s 1985 comedy of horrors, is a film that’s not afraid to ask the big questions, such as: “What is the nature of death?” “Is it really murder if you bring the body back to life after killing it?” or “Can it be considered a ménage a trois if the parties involved are a woman, a man and the man’s decapitated head?”

Loosely based on a short story by H. P. Lovecraft, Re-Animator is the account of Herbert West (Jeffrey Combs), a medical student who has discovered a method of reanimating the dead and whose grasp on sanity seems tenuous at best, which is so often the case in these tales.  West has recently transferred to Miskatonic University in Arkham, Massachusetts (a favorite Lovecraft setting), after being expelled from medical school in Switzerland.  Dan Cain, another med student, rents West a room and grudgingly becomes involved in his experiments with reanimation.  West soon incurs the wrath of Dr. Carl Hill, a legendary doctor and professor, after deriding his abilities and accusing him of plagiarizing research.  It’s not long until West and Cain are experimenting on corpses, bringing them back to life with predictably catastrophic results.

If this all sounds a tad familiar, it’s with good reason.  While sharing plot points with Frankenstein, Re-Animator also bears more than a little similarity to Stephen King’s Pet Sematary (or vice versa).  Actually, H. P. Lovecraft and Stephen King have a few things in common besides being authors of “weird fiction.”  Both set many of their stories in fictional Massachusetts towns, and both have terrible track records with films based on their work. 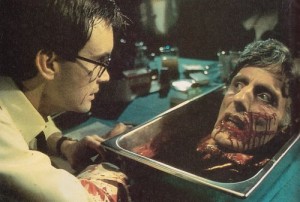 This film has a controversial history. Upon its initial release, Re-Animator failed to obtain an MPAA rating due to its excessive gore and “extreme” sexual content.  It has been reedited over the years, with blood removed and dialogue put it. Since then, the video/DVD has fallen out of print several times. Thankfully, it was reissued a while back by Starz/Anchor Bay as a completely restored two-disc special edition.

Horrors you’ll see during Re-Animator include decapitation by shovel, exploding eyeballs, an bone saw shredding through a reanimated corpse’s chest cavity, bitten-off fingers and a quite angry re-reanimated cat (“Don’t expect it to tango; it has a broken back”).  The movie’s most notorious scene finds Cain’s girlfriend, Megan (Barbara Crampton) bound naked to an autopsy table while being sexually assaulted by Dr. Hill’s reanimated head—which is being held in the hands of Dr. Hill’s reanimated corpse.  That’s right, not only can West reanimate whole corpses, he can also revive individual body parts.  This is seemingly brilliant in theory, but disastrous in practice. In one instance, an intestinal tract comes alive and attempts to strangle someone. 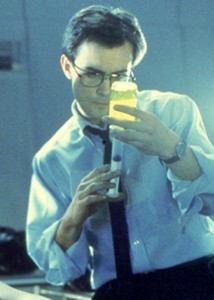 Re-Animator is definitely one of the crowning achievements of ‘80s horror cinema.  It has a wonderfully tight script, with each scene leading flawlessly into the next.  While you know the journey the characters are taking, you’re never exactly sure where it will lead them…though you can be sure it will involve droll dialogue, gallons of blood and gratuitous nudity, all filtered through Stuart Gordon’s wonderfully dark sense of humor.  As mad scientist Herbert West, Jeffery Combs gives the performance that would forever cement him in the minds of cult cinema fans everywhere.  And in the role of Megan (who might just have the worst luck of any character in horror cinema), Barbara Crampton shows what a dedicated actress and great sport she is. These two actors again proved how amazing they are in From Beyond, Stuart Gordon’s deranged 1986 Lovecraft movie, which was finally released on DVD in September 2007.

Now that it’s back in print, Re-Animator is a movie you cannot miss if you consider yourself a horror connoisseur.  You know the old adage:  Once they come back, they’re never the same.  Well, Re-Animator is back and, trust me, it’s better than ever.

This article was posted in Reviews and tagged '80s, Anchor Bay, Barbara Crampton, Frankenstein, From Beyond, gore, H. P. Lovecraft, horror, Jeffrey Combs, Pet Sematary, Re-Animator, Reviews, Slammed & Damned, Stuart Gordon, Theron Neel. Bookmark the permalink. Follow comments with the RSS feed for this post.Trackbacks are closed, but you can Post a Comment.