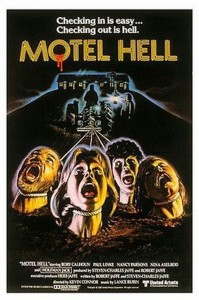 I just finished watching the wonderful 1980 horror flick Motel Hell and it got me thinking. Now, I doubt this is the reaction the filmmakers were looking for when they made this witty little treat, and it’s definitely not the reaction I had when I saw it originally as a teenager. But as one ages and the body begins to break down, the mind begins to assert itself. So bear with me. Watching Motel Hell as a kid, I delighted in seeing former western star Rory Calhoun playing a murderous, cannibalistic farmer. But as an adult, I realized this flick holds an interesting place in the history of horror movies: Motel Hell might well be the true last gasp of ‘70s horror.

In the 1970s, horror flicks were more concerned with story and character than with the gruesome, bloody kills that became the hallmark of ‘80s slasher flicks. Of course, slashers didn’t just pop up overnight. It’s pretty much universally agreed that Bob Clark’s excellent 1974 film Black Christmas is the proto-slasher. He laid the foundation that allowed John Carpenter to make Halloween in 1978. Both those films favored character and tone over blood and gore. It took 1980’s Friday the 13th to bring the slasher film into its own. Jason Vorhees not only chopped up a bunch of horny campers, he also pretty much single-handedly killed ‘70s horror. Sure, it can be argued that Jason was just Leatherface in a hockey mask, but the truth is fright films changed. But that’s as it should be—new horrors for a new generation.

Though it was also released in 1980, Motel Hell is ‘70s horror through and through. With more focus on story and style than blood and guts, director Kevin Connor has given us the charming tale of Farmer Vincent (Rory Calhoun) and his little sister Ida (Nancy Parsons). They run a little hotel in rural California called Motel Hello, though the constantly flickering “O” lends the film its ironic name. Vincent and Ida have a booming side business selling home-made smoked meats. Everyone agrees they are the best in the land and taste like nothing they’ve ever had. That’s because Vincent uses no preservatives and mixes in a secret ingredient: human flesh. 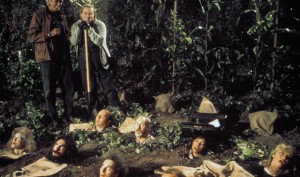 With his overalls and mane of white hair, you’d never think Vincent was a serial killer. At their core, he and the eccentric Ida are down-home country folk, and their work ethic proves it. Most nights, you’ll find them out booby-trapping the nearby country roads, hoping to cause car accidents. When they do, they drag the injured people back to their farm, sever the unlucky victims’ vocal cords and plant them up to their necks in the “secret garden.” They leave them there, curing, until they’re deemed ready, and then Vincent and Ida grind them up and mix them into their smoked pork sausage. An old-fashioned, God-fearing gentleman, Vincent is convinced he’s doing the Lord’s work, both feeding the hungry and slowing down overpopulation.

All is well until the night that Vincent ambushes pretty, young Terry (Nina Axelrod) and her boyfriend Bo. Bo is planted with the others in the garden, but Terry’s pure beauty touches Vincent’s heart and he lets her live. Terry stays on at the farm to heal, much to Ida’s chagrin. Little does Vincent know, this is the beginning of the end. 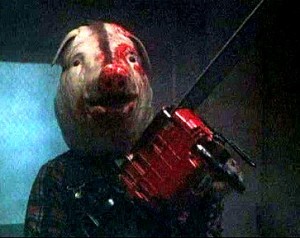 The next morning, Vincent and Ida’s baby brother, Bruce (Paul Linke), stops by. Bruce is the local sheriff, and he takes a shine to Terry. But Terry only has eyes for Vincent. She falls in love with her farmer in shining armor and agrees to marry him. This causes the jealous Sheriff Bruce to do some detective work. I won’t spoil the ending, but I will leave you with this awesome teaser: a chainsaw battle between Sheriff Bruce and a man wearing a pig’s head—yes, that’s right, two pigs fighting it out. This image is a nice example of the unexpectedly subtle humor in Motel Hell. Besides being a smart visual pun, it’s also a nice nod to Leatherface and The Texas Chain Saw Massacre. The filmmakers even manage to work in a clever reference to George Romero’s zombies.

While this 1980 flick pays homage to horror films of the ‘70s, it also retains the tone of those films. There’s almost no blood and a spooky, unsettling atmosphere permeates the proceedings. Director Connor sets a mood then trusts the story and actors to carry the movie. Calhoun makes Vincent’s surprise at finding love late in life quite touching, even while he’s grinding up some grungy punk rockers he’s caught in his web. And Nancy Parsons’ Ida, though clearly unhinged, is somewhat pitiable when she sees her brother slipping away.

Another thing that grounds this flick in the ‘70s is the number of fantastic supporting players from that period who appear. Though not well known today, people like the adorable Elaine Joyce, appearing as a zany swinger looking for a party, and the legendary DJ Wolfman Jack, playing a televangelist, were household names back in the Me Decade.

Yow! After looking back at this piece, I realize what started out as a simple review of Motel Hell has turned into something of a rant. That was not my intent, guys. I love slasher flicks—as long as they do what they’re supposed to do:  deliver several creative kills in a stylish way, with a modicum of wit. But over the years, they seem to have employed increasing amounts of blood and gore to make up for what they lack in plot. Please don’t let me put you off with highbrow terms like “tone” and “character.” The truth is, this flick is a devilishly good time. Check out the trailer below to get a taste of the treats available in Motel Hell. It’d be a shame if you didn’t check in some night for a visit.