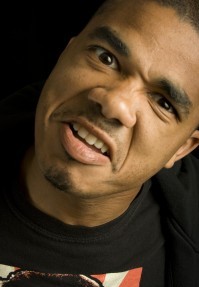 It’s time for another look at the cast of Trash Film Orgy’s upcoming horror spectacular, Planet of the Vampire Women. A couple of months ago, Slammed & Damned spoke with the lovely lunatic Liesel Hanson. Today, the subject is Jawara Duncan, master of stage, screen and video games—yes, Jawara is the living definition of Renaissance man. And as you’ll see, Jawara is not only well rounded, he’s also freakin’ nuts!

Hey man, thanks for taking the time to chat. Let’s begin at the beginning. From where do you hail, sir?

I was born in Vallejo, California, and have lived Northern California all my life.

Sweet. Have you always been a performer?

I was always a bit of a ham, but I didn’t really get serious about performing until junior year in high school.

Went to some midnight movies, auditioned for Monster From Bikini Beach, started doing stage and lobby shows, and the rest is prologue.

Nice. So you’re starring in TFO’s latest flick, Planet of the Vampire Women, and that’s cool. How is it going? Is it a fun shoot?

It’s fucking awesome! I’m making a movie with a bunch of my friends and getting covered in gore every other night. 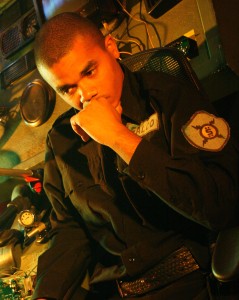 Hey, you can’t beat that! What character are you playing in the movie? I’m guessing you’re not a vampire woman.

Yow! Okay, sounds like you really are enjoying yourself. I hear you’re involved in the brutal world of…improv comedy. Tell us a little about the amusingly named ICUP.

ICUP is a group that myself, Stephanie Hyden and Josh Dietz started almost two years ago. We blend sketch and improv in a live show that’s laughtastic.

Where do you see yourself in five years, Jawara? Are you working toward any specific goals?

Making movies and telling stories. As long as I’m involved in theater and/or film, I’m happy. I would like to have the resources to tell my own stories eventually, but until then any job on a movie set will do—depending on the movie. 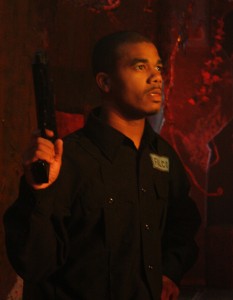 What do you like to do when you’re not acting or making people laugh?

I play indoor soccer, I like to party, I’m a member of the local safety club and I’ll play the shit out of some video games.

ICUP is an ongoing thing, but after this movie is wrapped I go back to looking for the next project. Plus TFO is always there in the summer.