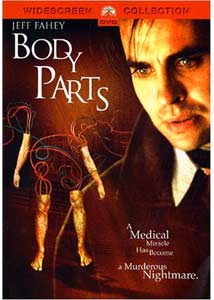 What is the nature of evil, and where does it reside within the body?  These are among the high-minded questions addressed in Body Parts, the surprisingly entertaining 1991 film by director Eric Red.

Dr. Bill Chrushank (Jeff Fahey) is a criminal psychiatrist/college professor who is torturing himself with these deep metaphysical issues.  Bill’s a good guy, with a wonderful wife, Karen (Kim Delaney), and two sweet kids.  Working with death row prisoners, he stares evil in the face every day.  All he wants to do is “cure” one person, heal one shattered mind.  But before he gets a chance, his life takes a severe turn.

Driving to work one morning, Bill is involved in a terrible car accident.  He’s hit from behind by a big rig truck and thrown through his windshield.  Amazingly, he lives.  But he does lose his right arm.  Lucky for Bill, Dr. Agatha Webb (Lindsay Duncan) is there to provide an experimental arm transplant.  Before long, he’s as good as new—he heals quickly, he blazes through physical therapy, and his new arm seems to work better than his original.  All is right with the world.  Then, one day, things start to go bad. 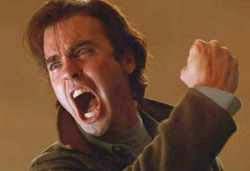 Though Bill has successfully returned to his life, he begins to experience violent outbursts and terrible visions of violence and murder.  Also, his new arm appears to have a mind of its own.  Bill soon learns that the donor of his arm was a multiple murderer named Charlie Fletcher.  Obviously, this news bothers Bill, and he shares his concerns with Dr. Webb.  She quickly assures him that his new arm is nothing but a harmless appendage and there’s nothing to worry about (between you and me, Dr. Webb is brilliant, but she’s somewhat ethically challenged).  After a little detective work, Bill learns that he’s not the only recipient of body parts from Charlie Fletcher.  It seems an artist received Fletcher’s other arm and an athlete got both legs…and someone even might’ve gotten the head.

Things only get worse for Bill.  It’s not long until he (or is it his arm?) is striking his child, trying to strangle his wife, and beating up people in bars.  The more he shares his theory about the causes of this behavior with the people involved, the more he’s ignored.  What will it take for people to believe Bill?  I’ll give you a hint.  It involves limbs being ripped off of bodies and a gun battle in an operating room.

Body Parts is a classic B movie, with a wonderful pedigree.  Jeff Fahey is terrific, of course, and chews as much scenery as possible.  There’s fine supporting work from Paul Ben-Victor and the great Brad Dourif, who is a favorite of horror fans everywhere.  (Though he usually plays a crazy or heavy, it’s worth noting that this is one of Dourif’s few sympathetic performances.)

Writer/director Eric Red is rather infamous in Hollywood.  He first came to attention as the writer of cult classics The Hitcher (1986) and Near Dark (1987).  In 2000, he was involved in an auto accident.  After hitting a car at a red light, he drove his car through the window of a bar/poolroom, seemingly on purpose, killing two people.  Charges were never pressed, and Red has moved on with his career, serving as a consultant on the recent remake of The Hitcher. 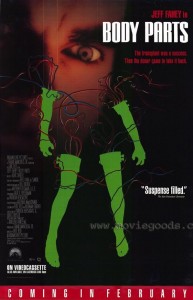 As turbulent as his life has been recently, Red did fine work on Body Parts.  The screenplay, which he wrote with Norman Snider, isn’t perfect (it falls apart a bit in the third act), but Red’s direction is more than capable.  He has a good eye for action, as is demonstrated by several big set pieces involving explosions and car chases.

If you’re looking for a great way to spend a Saturday night, let me recommend you rent Near Dark, The Hitcher and close out the evening with Body Parts.  There are far worse ways to spend an evening…just ask Dr. Bill Chrushank.

This article was posted in Reviews and tagged B movie, Body Parts, Brad Dourif, cult classics, Eric Red, Jeff Fahey, Kim Delaney, Near Dark, Reviews, Slammed & Damned, The Hitcher, Theron Neel. Bookmark the permalink. Follow comments with the RSS feed for this post.Trackbacks are closed, but you can Post a Comment.