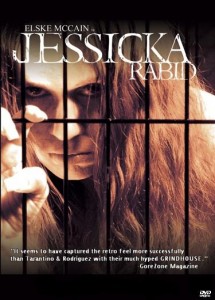 With the film Jessicka Rabid, writer/director Matthew Reel has collaborated with actress/producer Elske McCain to create a work that is brutal and unsettling, yet oddly poetic. Located firmly at the intersection of arthouse and grindhouse, the movie is rewarding, but definitely is not a standard piece of commercial product.

Brad Hoffman (Jeff Sisson) and his cousin Marley Hoffman (Trent Haaga) live in a modest tract house on the edge of the Arizona desert. Marley, nominal head of the household, has his hands full managing his small-time drug deals and keeping Brad in line. They are the very definition of a dysfunctional family. And locked in a cage in the garage is the family’s dirty little secret: the simple-minded Jessicka (Elske McCain). Possessing the body of a woman and the mind of a child, Jessicka is used as Brad’s personal sex toy and pimped out to pornographers for fast cash. When Brad’s sister Abby (Cisiany Olivar) returns home and Marley leaves town on business, events occur that drive the story to its inevitable, violent conclusion. That’s about it, plotwise. Although there is a story being told, there’s not really a traditional narrative structure at work.

The denizens that populate the film’s universe are vividly brought to life by the cast. It’s hard to take your eyes off Trent Haaga whenever he’s onscreen. Unfortunately, due to demands of the narrative, Marley drops out of the story for a while and Haaga is sorely missed. He imbues Marley with an uneasy combination of menace and pathos. He’s just a guy trying to get by, but he’s at his wits’ end trying to both contain Brad and take care of business. As the film progresses, Haaga communicates his character’s desperation so well that we actually feel sorry for Marley and the tragic role he plays.

One character you don’t feel sorry for is Brad. Jeff Sisson plays him as an unusual mixture of slacker and sociopath. It’s rather disconcerting that Sisson is so convincing. Cisiany Olivar’s Abby initially appears compassionate but, as if falling under her family’s spell, she soon exhibits the bad behavior typical of the Hoffman clan. Seemingly Jessicka’s only friend, Abby might actually be her worst enemy.

Of course, at the center of the film is Jessicka. If Elske McCain’s portrayal wasn’t on the mark, nothing here would work. Her performance easily could have been over the top, but she takes a cliché character—the mentally challenged victim—and makes her not only believable, but compelling. The part had to be uncomfortable to play, and McCain’s performance is a brave one. Her task was made all the more difficult by the fact that Jessicka does not speak. McCain’s eyes relay volumes on both the degradation Jessicka experiences and the satisfaction she takes in revenge.

Matthew Reel is an imaginative and artful filmmaker with a comprehensive grasp of the medium’s history, and he uses it to good, if sometimes disorienting, effect. His influences range from experimental directors such as Kenneth Anger to schlockmeisters like Joe D’Amato and Michael Findlay, and all are on display. Though the film feels somewhat derivative at times, Reel’s work is highly personal and it must be said that Jessicka Rabid looks like nothing else out there today. 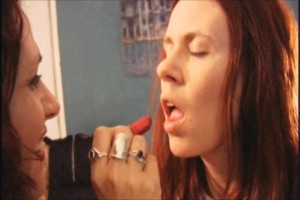 I was serious when I mentioned the grindhouse/arthouse paradox. While the film would be right at home in Times Square circa 1970 as a double feature with an Andy Milligan flick, it is sprinkled with frequent touches of surrealism. Although Reel often is able to use the flick’s low budget to his advantage in effectively evoking the aura of exploitation cinema, it does occasionally hurt the film. Some of the effects are just passable, and the screening version I received has a woefully uneven audio mix, but this issue will be corrected before wide release.

It’s safe to say that Jessicka Rabid will not be everybody’s cup of tea – far from it. Viewers searching for a routine slasher flick or scary movie are advised to look elsewhere. To a large degree, Reel ignores traditional film grammar and syntax and tells his story in a highly impressionistic manner. Also, though the flick is not as graphic as some available, be advised that incest and rape are integral to the plot, which could almost be described as “Western Gothic.”

Based on the title alone, it would have been easy for Reel and McCain to churn out a formulaic chiller. But they definitely chose the road less traveled. Jessicka Rabid may be many things, but it’s not just another horror film.