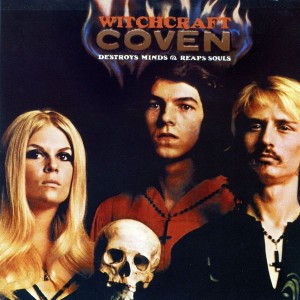 In the late 1960s, the supernatural was the In Thing. I’m sure the decade’s tumultuous social change and death of hope had something to do with it—JFK’s gleaming Camelot quickly gave way to Charles Manson’s brutal murders—and when people feel they’ve lost control, they search for answers anywhere. But enough of this mass psychology drivel. What I’m getting at is in the Age of Aquarius, the occult was everywhere: Anton Szandor LaVey (aka Howard Levey) and his Church of Satan attracted every manner of celebrity; pop parapsychologist Hans Holzer and pop witch Sybil Leek were best-selling authors; even “real” writers got into the game with novels such as The Mephisto Waltz and Rosemary’s Baby, both of which spawned excellent movies. And don’t think that popular music was left out. While several rock groups with supernatural/horror themes formed at the time, the most prominent being Black Sabbath and Alice Cooper, today I want to talk about Coven, a little-remembered band from that mystical, confused period.

Coven formed in Chicago in the late ‘60s, led by Jinx Dawson, a throaty wailer with a hearty interest in the occult. Though Coven finally hit the charts in 1971 with “One Tin Soldier,” the theme to Billy Jack, their most interesting release was the 1969 album Witchcraft Destroys Minds & Reaps Souls.

When I was a kid, I used to troll the record department at Kmart for albums with interesting covers. One day, I was browsing through “C” and there it was. Peering out at me from the bin was a foxy blond chick dressed in black and holding a skull. She was surrounded by guys in robes and above her head were the words Witchcraft and Coven, surrounded by cheesy flames. I ask you, what’s a 10-year-old boy with his own hearty interest in the occult to do? He immediately begs $3.99 from his mom; that’s what he does. 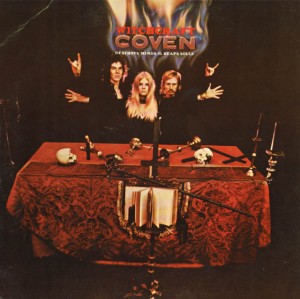 When I got the record home, I unwrapped it excitedly. “Ooh, cool,” I thought. “It has a fold-out cover.” (I loved those.) I opened it up and—oh my god, there was the blond singer, lying naked on an altar with a skull resting atop her pubic area, surrounded by crazed Satanists! The album also included a poster of this picture, with the lyrics printed on the back of it. Man, this was already an amazing album and I hadn’t even listened to it yet! Then I put the record on. All I can say is, musically, it was average psychedelic acid-tinged rock dressed up with occult themes (think: Cream meets the Jefferson Airplane singing about demons and witches). Although Jinx Dawson could sing fairly well, she was overly dramatic and very earnest about the whole witchcraft angle. Every song on the album is occult-related and several border on cornball. Titles include “Dignitaries of Hell,” “For Unlawful Carnal Knowledge,” “White Witch of Rose Hall” and “Pact with Lucifer” (“Pact” was misspelled as “Pack” on the album cover, giving the song a whole new interpretation in my mind: “Me and the Devil are going on vacation!”). But I must admit, there’s some good guitar playing on it and a few catchy tunes that I still like. Many years later, I learned that most of the songs were written to order by a songwriter at the request of the band’s producer, who was most likely hoping that witchcraft would destroy minds and reap dollars.

The album is capped off by the last track, “Satanic Mass,” a 13-minute “recording of a Black Mass performed by Coven.” And that’s exactly what it is: a textbook Black Mass, led by someone that sounds like a hammy radio announcer. The whole thing was somewhat scary for a 10-year-old kid, but today comes off sounding like a bad Disney Halloween haunted house record. 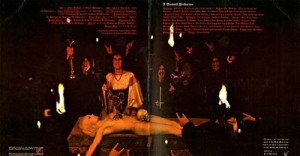 The album is out there on the internet for anyone that cares enough to look for it. It’s worth hearing if you’re interested in witchcraft and/or the history of rock music, or even if you just want a conversation starter for your next Halloween party. To me, Witchcraft Destroys Minds & Reaps Souls is both a relic from a different time and a link to my childhood. But, mainly, it’ll always be that far-out Satan record with the poster of the naked foxy blond chick.