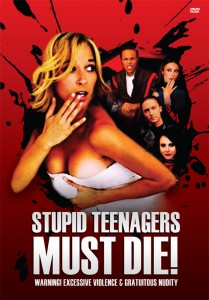 If you think about it, the name of Jeff C. Smith’s new ‘80s teens-in-peril horror parody is as much a mission statement as it is a title: Stupid Teenagers Must Die!  Seriously, if one had to sum up this particular genre with one phrase, this is the perfect choice.  And, yes, the teenagers in this movie are quite stupid, and for that, they must die…and die they do—in gory, comical fashion.

The filmmakers have gone out of their way to hit all the right notes here.  You got your séance gone awry.  You got your Ouija board abuse.  You got your murder and mayhem.  Also, there’s no budget.  Really.  None. They’ve set the bar pretty low here, which makes it all the easier to jump over, I suppose. The one thing Stupid Teenagers Must Die! does have that’s not usually found in Z-grade horror flicks is wonderful performances, and that makes up for a lot.

The setting is the 1980s—an evil time when leg warmers thrived and a young woman named Madonna was queen.  A group of stupid teenagers have gathered in an abandoned house where a psycho, with the explanatory name Murder McGee, butchered his entire family.  The teens intend to have a séance, contact the spirits of the killer and his victims, and, what the heck, have a few laughs.  There’s a little drinking, a little drugging, a little sex—all the ingredients for a good time. That is, until blood starts to spray and people begin dying. 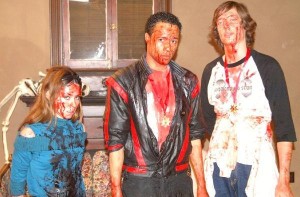 Drawing inspiration from several “rats in a trap” horror flicks, Stupid Teenagers Must Die! seems most influenced by the ‘80s classic Night of the Demons, which shares an almost identical storyline.  But STMD! has its tongue planted firmly in its cheek, which is a very good thing. Granted, the film’s pacing could be tightened up and some of the gags fall flat, but the young actors are clearly enjoying themselves and do all they can to put across the material.  Special mention goes to Ashley Schneider as Julie, the heroine; Jamie Carson as Sissy and Christina DeRosa as Jamie, the lesbians; Lindsay Gareth as Tiffany, the blonde bimbo; and Cory Assink as Geek One (really, that’s the name of his character). 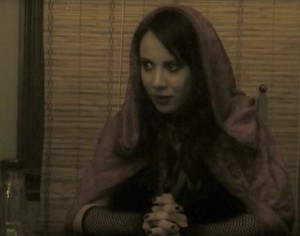 Director Jeff Smith is pretty much a one-man show.  He directs, he edits, he shoots, he acts, he writes.  Luckily, he knows what he’s doing.  Though the action can sometimes be hard to make out (the lighting is bad, and the sound is worse), Smith can tell a story visually.  The camera is always well positioned and moves quite a bit without calling attention to itself.  The flick also has a good score, which is not usually the case with the recent flood of DIY digital video productions.

Stupid Teenagers Must Die! has been playing at various film festivals and doing pretty well for itself—well enough that it has gotten good distribution and is now available on DVD from all the usual online vendors, conveniently just in time for Halloween.  So, if you want a few laughs this All Hallow’s Eve, treat yourself to Stupid Teenagers Must Die!  It contains fewer calories (and a lot more laughs) than Halloween candy, and it’s almost as good.

This article was posted in Reviews and tagged '80s, blood, Halloween, horror, Madonna, Night of the Demons, Ouija board, psycho, Reviews, Slammed & Damned, Stupid Teenagers Must Die!, Theron Neel. Bookmark the permalink. Follow comments with the RSS feed for this post.Trackbacks are closed, but you can Post a Comment.